If you first begin with plant dyeing, it’s easy to get ‘hooked’. It’s so fascinating to make soup out of something you pick in nature, and color wool or some other natural fiber with it. The colors are so harmonious. All colors can be used together. That probably comes from the fact that no colors turn out completely clean, not as sharp as chemical colors easily get.

The exiting thing about plant dyeing is that you never know exactly what you’ll get, and you can’t be sure to get the same exact color the next time. 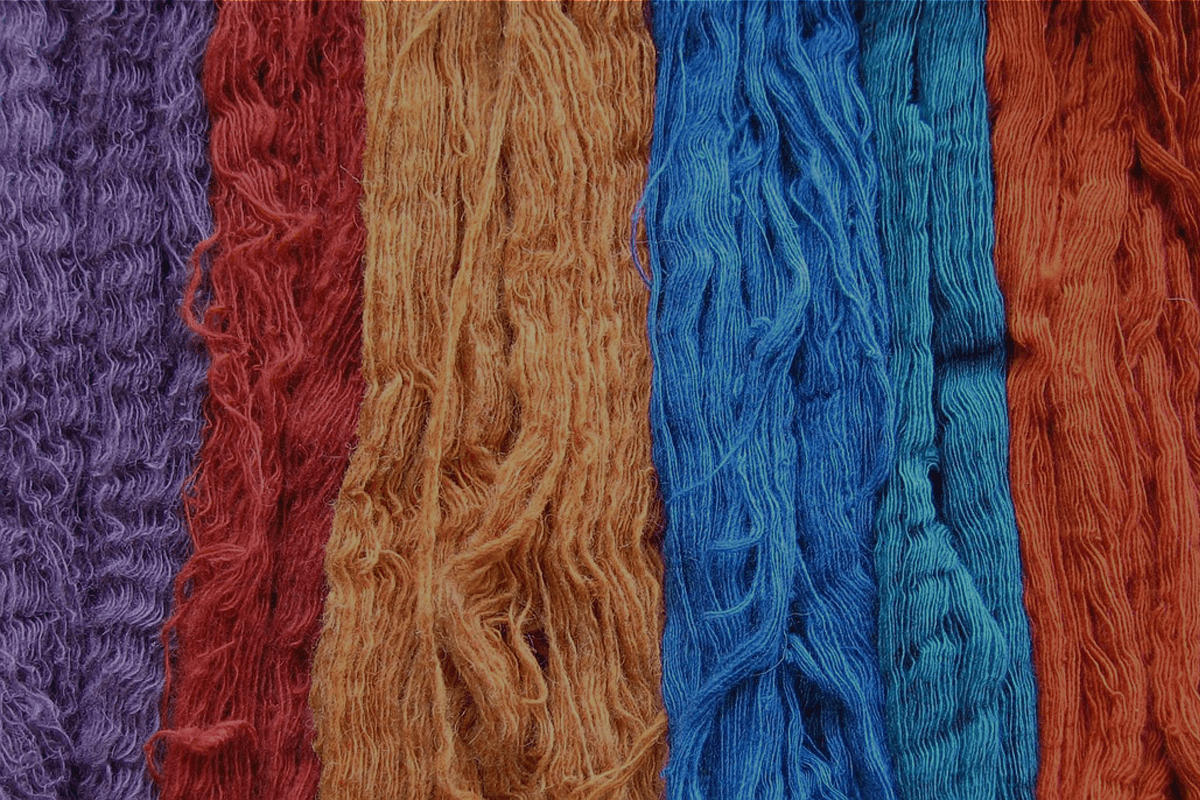 Plant dyeing works best with wool, but you can also use silk. Plant fibers like cotton and linen don’t absorb dye nearly as well.

The wool mattes the most around 40 oC (104 F), therefore it shouldn’t be treated at this temperature, but put directly into the dye at 45 – 50 oC (113-122 F), for then to be heated to the dyeing temperature which can vary between 60 and 80 oC (140 and 176 F). The wool can tolerate temperatures up to 90 oC (194 F), as long as it isn’t moved too much, and it mustn’t boil. Then the wool is destroyed. Before the yarn can be dyed, you usually have to use a mordant. They most frequently used mordents are alum, wine stone, tin and iron sulfate. Most of these can be bought at a well stocked pharmacy.

Most green plants you pick out in the wild give yellow dye. Birch leaves, Heather, Blueberry shrub, Lady’s Mantle, Tansy and Bog Myrtle. The last one has a very pleasant smell. Bog Myrtle has also been used to season beer and liquor, and as a fragrance tassel to keep vermin away. By varying the mordant the color can be varied from a clear yellow to moss green.

To get red we have to use roots. The roots of Northern Bedstraw and Tormentil are easy to find, but it’s quite a job to dig up enough. Madder is used a lot. It doesn’t grow in the wild here in Norway , but it can be cultivated. Most people buy it at a pharmacy or a specialty stores. All these roots give a warm, orange-red color. But it you want a more bluish red color, you buy Kochenille. It’s a louse from a cactus in Mexico , and it’s widely used as a dye both in cosmetics and in sweets. It gives a purple-red color on wool. Mixed with madder it gives a great, deep-red color.

To get a warm and golden brown color, you use green lichen, and dye in an iron kettle. Other lichen can also be used for dyeing; Iceland Moss, Stirton etc. They give different yellow to brown colors. Bark from for example Alder also gives a brown color. Lichens contain their own mordents, so it isn’t necessary to use any on yarn that will be dyed with lichen.

The hardest color to get is blue. The old Vikings (yes even all the way back to the pharaohs in Egypt ) have made blue from a plant called Dyer’s Woad. There are no problems growing it here, but the process of grinding and fermenting the leaves to get a small amount of color isn’t something I choose to do.

Then it’s much easier to use indigo (it’s the color of your dark blue jeans). Indigo can be bought at a pharmacy. Nowadays it’s chemically produced, but it’s the same dye that can be extracted from the indigo plant, and from Dyer’s Woad.

Indigo isn’t soluble in water, so you first have to make a color bath, with sodium hydrosulfite and caustic soda. It’s a completely different process than to boil a dye soup for the other colors.

Dyeing with mushrooms has become very popular in later years. Mushroom can give just as exiting colors as plants. There’s nearly no limit to how much experimenting and trying you can do.