Very generally speaking, the modern day witch bottles are very similar to historical witch bottles in their basic structure, even though their intended purpose has changed. The most common purpose for constructing a witch bottle today is capturing negative energies targeted at the constructor of the bottle, her family or her home. Even though some bottles are ‘mirroring’ in nature, they aren’t normally built to cause agony to the sender of negative energy/caster of curses. Some witch bottles are intended to change negative energy into positive one and then release it into the surrounding area. This kind of bottles could be classified as ‘guard and protect’-bottles. 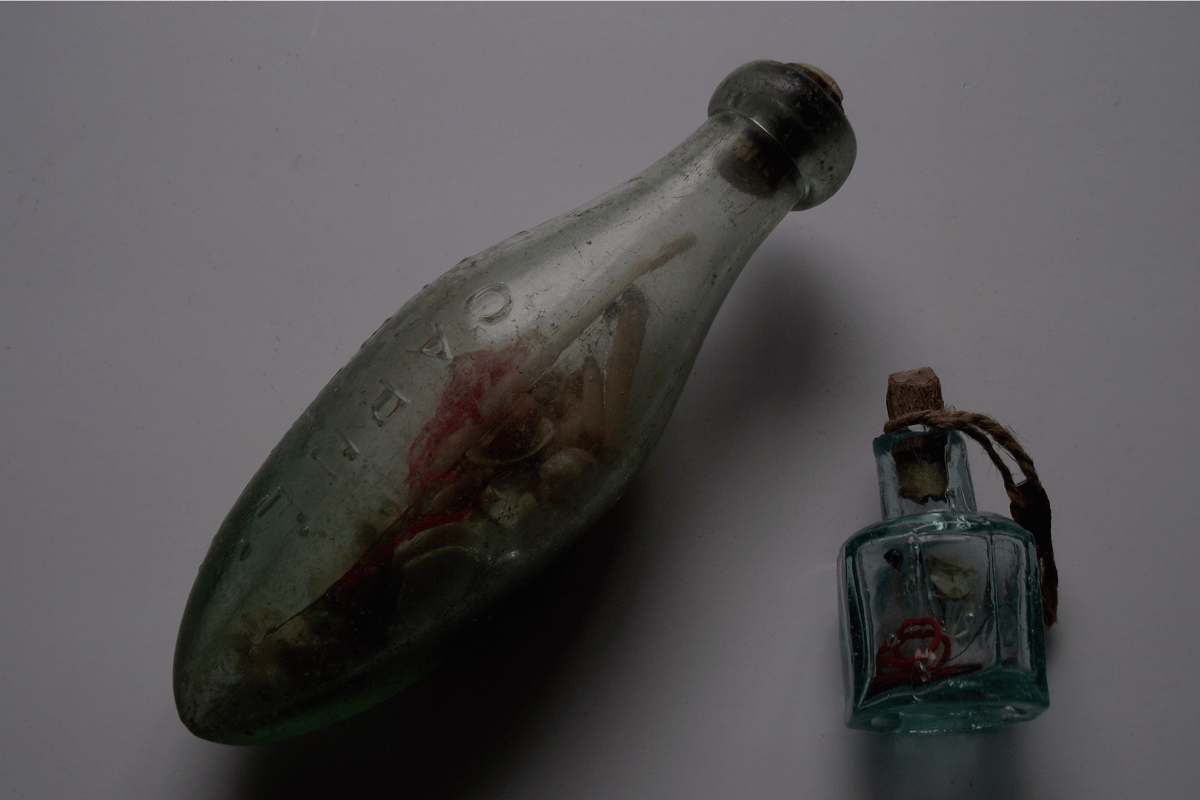 The basic structure of witch bottles can be used for purposes other than protective: for financial gain, for helping with artistic creativity, to call forth positive energy (instead of ‘just filtering out negative energy’), for improving health, etc.

One could say that the basic principle is the following: practically speaking, a witch bottle is a container of some sort, usually a jar or a bottle, which is filled with objects and often also liquids which fill a given magical purpose. The person making the witch bottle, or in other words, the one casting the bottled spell, can charge the objects magically beforehand and build the bottle to work on this charging until the need of renewing the spell arises. Witch bottles can also be built to recharge themselves by the energy they ‘capture’ for as long as the bottle stays unbroken, whether it be years or centuries.

Instead of magically charging the items, one can build a bottle whose the powers are based on its contents, but cumulatively so, resulting with powers stronger than the sum of its parts. Also, this version can be designed to be seasonal or ‘one time lasts a lifetime’.

So what does the modern witch bottle contain? The typical contents of the basic protective witch bottle today is quite similar to that of the traditional one: bent iron nails (some say they are better if old and rusty while others say clean and unused are best), thorns, rusty razor blades, broken glass or pieces of broken mirror (some say breaking a mirror for witch bottle use causes bad luck, others claim that breaking a mirror for this particular use will not cause bad luck except for people sending negative energies to the bottle builder), or other sharp and dangerous ‘nasties’, urine of the bottle’s builder, often also menstrual or other blood. One could use semen as the masculine counterpart for menstrual blood. The bottle is often a common tight-lidded glass jar or a bottle with a rather wide mouth.

Other types of witch bottles may contain sand or different colored sands, crystals, stones, knotted threads, herbs, spices, resin, flowers, candles (no, you won’t burn them inside the bottle), incense (you won’t burn it either), votive candles, salt, vinegar, oil, coins, sawdust, ashes etc etc. Actually, everything used in ‘normal spells’ can be used in this bottled version of a spell, the witch bottle.

Additional materials include candles and/or wax to seal the bottle/jar with. The rest of the materials depend on the ritual in question (if any) and the religion of the builder of the bottle.

When it comes to hiding the bottle, a Pagan living in their own house may be able to hide the witch bottle in the traditional way under the fireplace, under the floor, or in the walls. However, it is more common to bury the bottle in the yard in a place where nobody will accidentally break it while digging in the garden. One such place is behind stones under the stairs. For a Pagan living in a terraced house burying the bottle in the garden should work well – as long as you are careful not to attract too much attention to yourself while burying an odd object (the bottle) during the correct phase of the Moon, at night, with just candlelight, wearing suspicious looking ritual garments.

Apartments can be a difficult place to live in when you’re trying to find somewhere to hide a Witch-bottle. Or, at least it may seem like that! Digging a hole and burying the bottle in the yard may be not only difficult but also quite likely not allowed. Nosy kids can dig the bottle up and hurt themselves on the contents. Not to mention that in the right (or wrong, to be more precise) neighborhood could cause lots of trouble for the Pagan attempting to hide a bottle in the yard.

However, the situation is not that impossible! The bottle doesn’t need to be situated near the home in order for it to work. If you are constructing a bottle intended to be a personal safety guard, it can be buried in a forest or sunk in a swamp. With a Witch-bottle designed to guard a given home and those living in it, you can use a large flowerpot by the front door or on the windowsill to bury the bottle into. In this case, the bottle should be small enough to fit in the flower pot – with the plant! Another idea I’ve heard is putting the witch bottle into a closet next to the front door, where it could easily do its job as a guardian and protector of the home and its inhabitants.

However, this solution might cause some trouble if the same thing that happened to one Pagan happens to you: the witch bottle she kept in her closet worked very well – until it one day literally blew up. The bottle was of the very traditional type, so cleaning up after this wasn’t that pleasant, as you can well imagine! While refining the idea further, we ended up putting the bottle in a covered bucket filled with soil and then putting the bottle inside the bucket in the closet. For a Pagan still ‘in the closet’ or living in something like student housing with a roommate these ideas may not be that usable.

There’s still no need to panic, as witch bottles can be made in miniature size, too. One witch working with test tubes in her professional life worked out recycling methods for test tubes as miniature witch bottles small enough to fit in the flowerpots on her windowsill. If you want to use test tubes, make sure you can close them tightly. There are also miniature bottles and jars available at various gift shops which can be used as well. It should be noted that not all Witch bottles are designed to be hidden away.

Some are intended to be left out in the open, for example on the windowsill, on your altar or on your (work) desk. You can easily develop a large number of versions of the basic witch bottle to suit your (and others’) needs and life situations. Even during the time historical witch bottles were in use, there were new versions being developed, so why not today?!

There is no One True witch bottle (even though there probably are people who would like to claim so), only bottles more like the traditional ones and bottles of more modern variety. I have run into all kinds of bottles myself, some being love-raising bottles on the brink of going over the level of good taste and ethics (some actually going overboard) to bottles constructed to bind a given bad person very tightly. The many varieties speak volumes for how effective this type of spell work can be and how versatile it is.