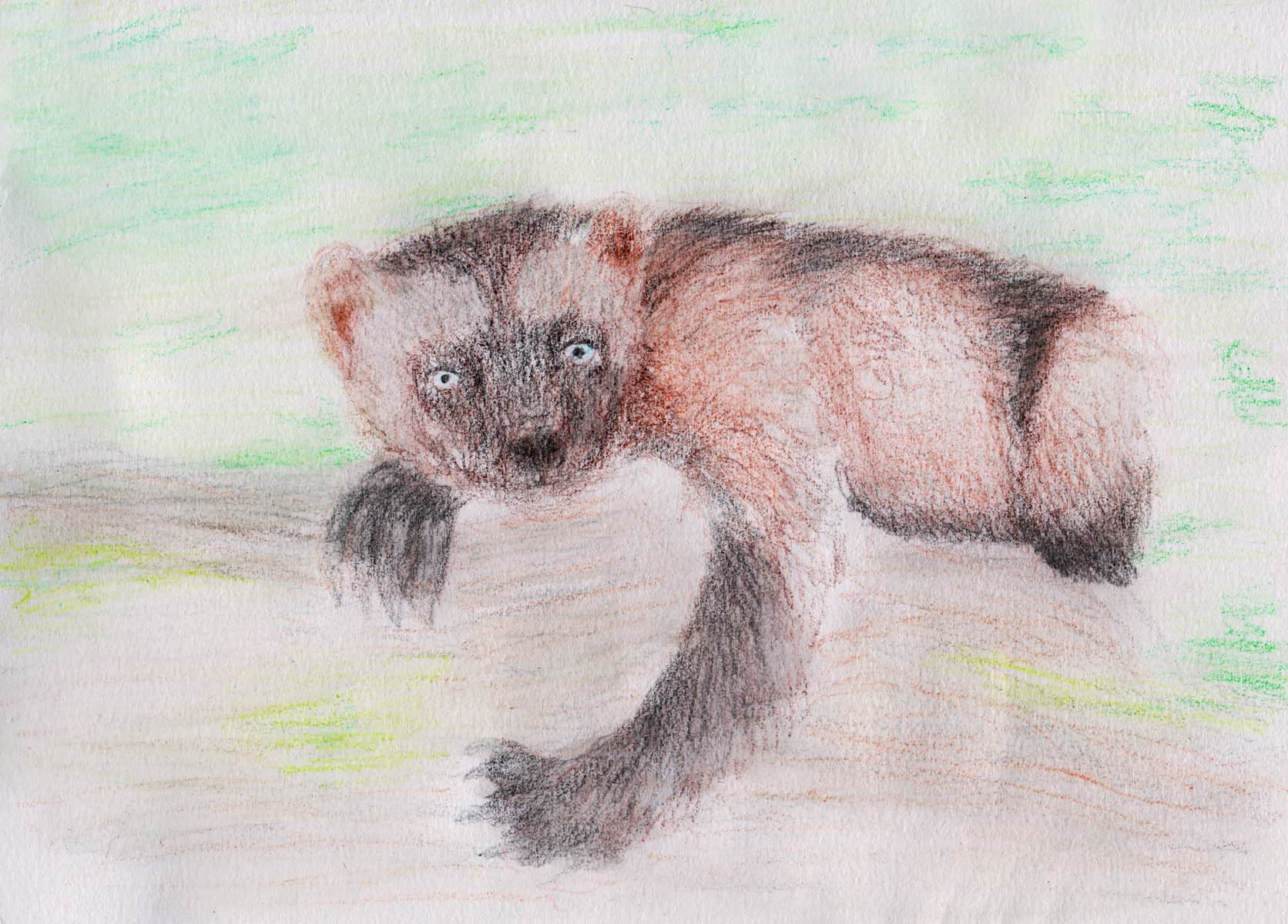 I’ve been curious about the myths and folklore about wolverines for a while since they live just a bit further up the mountain here and is one of our larger predators. So when my friend Jonquil asked me to write about them, I couldn’t resist.

Some facts about the Wolverine

Wolverines live as solitary animals in isolated northern areas, like the arctic and alpine regions of Alaska, northern Canada, Siberia, and Scandinavia. They’re also native to Russia and the Baltic countries.
The Wolverine is an opportunist and eats mostly carrion, small mammals, the eggs of ground-nesting birds, and berries. On occasion, it also kills sheep and reindeer.
An adult individual is 70–85 cm (27.5-33.5 inches) long, with the addition of a tail that’s 15–25 cm (5.9-9.8 inches). The female weighs on average 8–12 kg (17.6-26.4 lbs) and the male 12–18 kg (26.4-36.7 lbs).
It has a long, thick coat that’s dark brown, almost black with a lighter band along the side of the body and on its forehead. 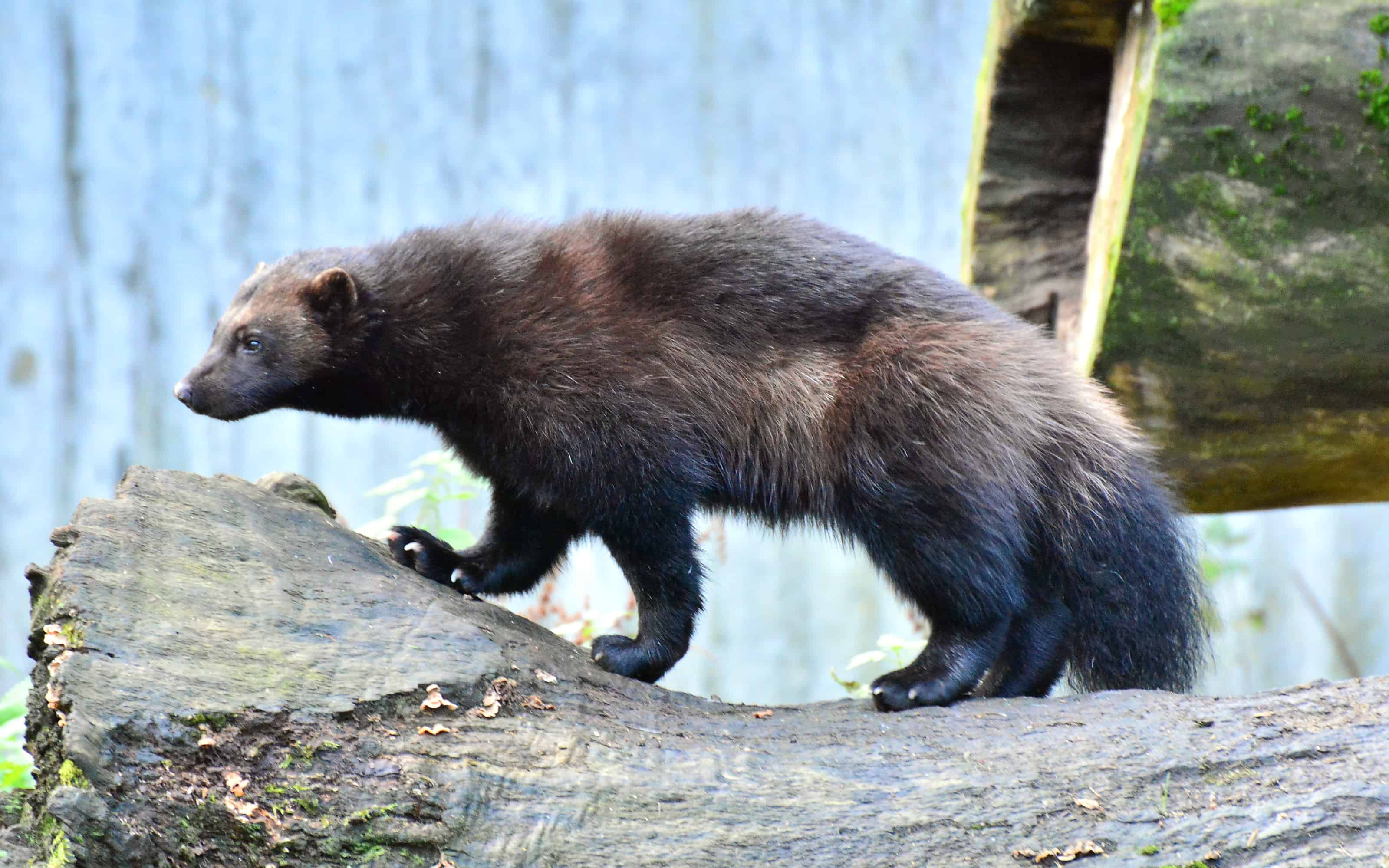 Photo by: Esquilo on Wikimedia Commons

It has large feet in relation to its body size, which are well suited for moving and digging in the snow. The five toes have claws that make it a good climber. The Wolverine has excellent hearing and sense of smell, while the vision is poorly developed. It is generally shy of humans and usually stays away from populated areas.
In many areas, it’s been decimated by hunting and is therefore a protected species. In Norway, however, there’s still some hunting going one by license from the government if the sheep or reindeer owners feel threatened by it.

The Folklore and Myths

This animal shows up in the stories, myths, and legends of northern peoples in both the eastern and western hemispheres. Although not to the same extent as for example the Wolf.

In many areas, it’s seen as a glutton and it’s worked itself into the languages. In French-speaking parts of Canada, the wolverine is referred to as carcajou, a French corruption of an Indigenous American word meaning “evil spirit” or “mountain devil.” In France, its name is glouton (glutton) and in Germany, it’s Vielfraß (“devours a lot”). Even the Latin name Gluto gluto relates to glutton.
In Scandinavian folklore, it’s said to be an aggressive murderer, an extremely greedy animal, who likes to kill far more than it needs.
In medieval copper etchings, you can find pictures of Wolverines squeezing themselves between trees. This was said to be because the Wolverine, after filling the stomach up to the bursting point, sought out the trees to squeeze the contents out of the stomach. Then it could resume gluttony.
One of the theologians of the 18th century, Erik Pontoppidan, said that a Wolverine could even eat straight through a stone wall.
An old Norwegian superstition says that if you put on wolverine fur, you will become as greedy as the Wolverine.
Both in Scandinavia and North America, the Wolverine has a reputation as an effective burglar of food supplies.
Lucien Turner said in his book “Indians and Eskimos in the Quebec-Labrador Peninsula Ethnology of the Ungava District” that the wolverine was seen by indigenous Americans as “embodying all the cunning and mischief that can be contained in the skin of a beast.”
It’s known as a ferocious and aggressive animal and here in Scandinavia, they say that even the bear will turn away if faced with a Wolverine. There’s some evidence that their aggression is just for show – a demonic display performed not as a precursor to a good lashing, but simply to scare away the threat, like a larger predator or a human. They can actually be quite playful.
Some Indigenous American tribes believe that the Wolverine possesses special powers and are a link between the spirit and the physical world. They were regarded as the last phantom of the wilderness, master of the forest, and a trickster hero by some tribes. Also, in at least one Innu myth, it is the creator of the world.

The spirit animal qualities for the wolverine are attitude, strength, confidence, resourceful, determined, intense energy, wild and untamed.
The Wolverine tells you to love your shadow side instead of hiding it. If you’re a bit of a wild child inside, there’s nothing wrong with letting that out to play once in a while. Be yourself without thinking of other people’s opinions. If someone or something is holding you back, fight it or adapt. It’s your choice. 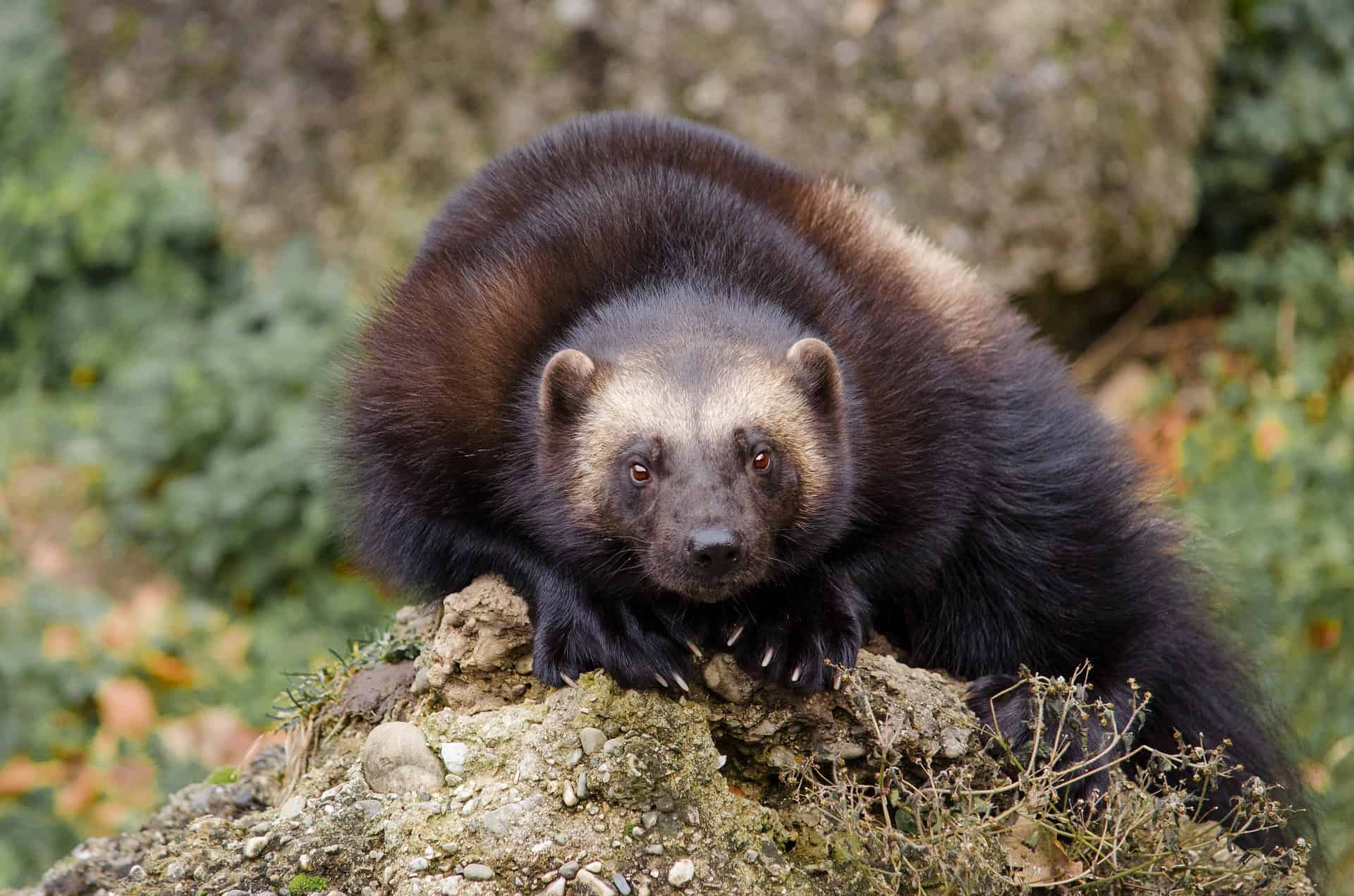 That’s what I was able to find on the Wolverine. I will be back with more animals later.

If there’s a particular animal you want me to check the myths and folklore for,

leave your suggestion in the comments.

Oh, before I forget, the picture at the top is a colored pencil sketch I did earlier this year.