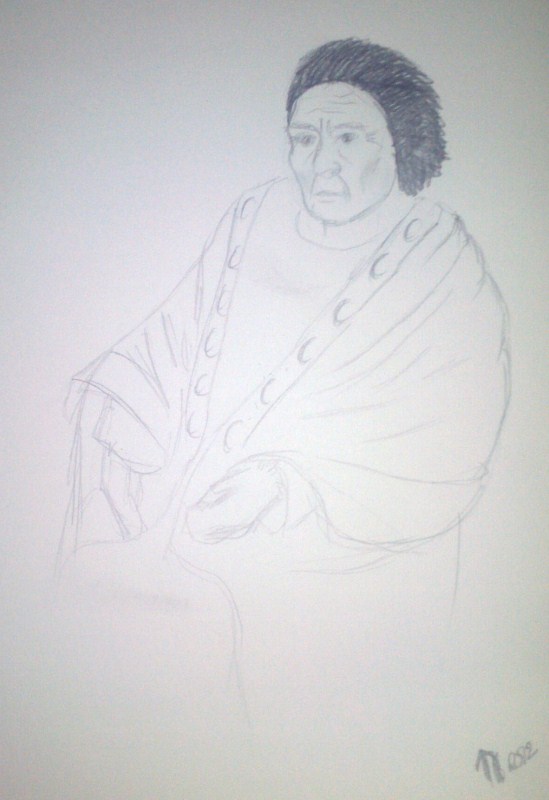 I want to take some time to describe the Völva as I see her, based on the Eddas, sagas and numerous research reports I’ve read, and the knowledgeable people I’ve talked to about this.

I see her as an older woman, at least mature, and very experienced in galðr, seiðr, and with a lot of knowledge about the facts of life.

I haven’t been able to find any references to the Volva using herbs or other things than seiðr or galðr to heal, but I’d like to think they used what was available. It’s also possible that someone else in the society had the role of the healer. It is my belief that a Volva was a respected member of society, although existing on the fringe and sometimes feared, much like the wise women or witches that came later.

The Volva was a role certain women with a lot of knowledge and abilities took on or were given. When not in this role, they might be described by other names, such as perhaps seiðkóna. As far as I’ve gathered from what I’ve read, they gave advice, foretold the future, and performed different kinds of magic and healing. There aren’t an overwhelming number of original sources on the Völvas, and their practices seem to have been a bit different from country to country.

The travelling Völva, to take one example, seems to have been more common on Iceland and Greenland. I suspect there were other differences as well. The practice of seiðr seems to have been somewhat central to their role, sometimes this was solitary seiðr and sometimes they had help from other people. The purpose of the seiðr wasn’t always prophetic, as some seem to think.

I’ve found fewer references to that than instances where they tried to change things. What I have found are references for causing harm and killing people, changing the outcome of a battle, changing the weather, predicting when a famine would end etc.

As for the equipment of the Völva, we know very little. There’s a good description from Herjolfsnes, on which the sketch above is based, other than that we only know them as staff carriers. Numerous objects have been found, but they haven’t been able to decide if they’re skewers or Völva staves. For some reason, it seems I’m heading towards this role sometime in the future. I wouldn’t say I have enough knowledge and experience to accept it yet.

I’m not saying this is the only interpretation or 100 % facts. That would take a thick book, many years of research, and a lot more written and archaeological evidence than we have now. I don’t have all the reports available, just the ones available here in Norway, but that’s a massive stack of paper nonetheless.