Use what you’ve got – Substitutions for Herbs 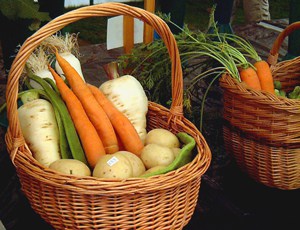 I’ve heard many complaints of how expensive herbs can be when you can’t grow them yourself. So I thought I’d write a little something on substitutions. You might already have everything you need in your kitchen cabinets.

Let’s start with the Potato. I bet you have some at home. It can be used for image magic, grounding, and healing. A Potato can also be used as a poppet. Think how easy it would be to quickly carve a Potato, instead of having to sew a proper poppet. The Carrot is mostly associated with fertility and lust. Not that surprising when you think about its shape. Almost all roots with phallic shapes have this property. The Carrot was also considered a ‘bane to the most evil of spirits’, and was used to repel them.

The properties of Cucumber also include fertility (again the shape) , but also chastity and healing. For a fertility spell, keep a Cucumber in your bedroom, and replace it every seven days. A Tomato can be used for magic workings concerning protection, prosperity, and love. When a Tomato is placed on the windowsill, or any other household entrance it keeps evil from entering. Place a large red Tomato on the mantle to bring prosperity into the home. Replace it every three days.

The Onion has properties like protection, exorcism, healing, money, prophetic dreams, and lust etc. Combined with Garlic it’s said to fend off witches, but who’d want to do that? Take a small white Onion, stick it full of black-headed pins, and place it in a window. This will guard your home against evil. Since the Leek is used as an onion, it too has protective powers and can be used for exorcism, but it also has love as one of its properties. Garlic is also used for protection and exorcism, and is featured in almost every vampire story there is (at least the older ones) . It can also be used for healing, lust and to avoid theft etc. Eating and carrying Garlic is believed to enhance speed, strength, courage and endurance, and soldiers throughout history have used it for these properties when going into battle.

The Artichoke is said to aid in love and spells to increase sexual desire, and eating Artichokes apparently helps prevent wet dreams and wards off Incubi and Succubi. There are many, many more vegetables with magical properties. You just have to remember to check the ones you’ve got. And then there are grains. Wheat is associated with fertility and money. A sheaf of Wheat represents the divine harvest and is often found on older peoples’ gravestones. It can also represent the long and fruitful life enjoyed by the deceased. In hex signs of the Pennsylvania Dutch farmers, it symbolizes abundance and goodwill.

You can also do Wheat Flour divination. First dampen a surface (wood is good) , then sprinkle Wheat Flour onto the damp surface while concentrating on your future, then use unfocused eyes to see what patterns show up in the flour. Rye is connected to love and fidelity. The Swedish expression ‘Råg i ryggen’ (translates to ‘Rye in the back’) means that you’re able to stand up straight, or that you’re strong. Some say it comes from the slogan of a bread producer, but I believe it comes from the strong straw of Rye. Ergot, which is a very dangerous fungus, is especially common in Rye. So be careful and check that there isn’t any on the Rye you’re going to use.

Oats are useful in money and prosperity spells and in harvest rituals. They can be used on the altar in grain form or straw form, and the flour can be used to bake Oatcakes as offerings to the Goddess. Oats symbolize music, and I suppose you’ve all heard the expression ‘sewing your wild oats’. Barley can be used in love, healing, and protection work. It’s thought to be a symbol of rebirth, or perhaps of a birth period. Alphitomancy is an ancient method of determining the guilt or innocence of a suspect person by feeding him/her a specially prepared Wheat or Barley loaf or cake. If the person suffers from indigestion or finds the loaf to be distasteful, this is interpreted as a sign of guilt. To undo a sorcerer’s spell, one should eat Barley cakes over which an incantation has been said; but the cakes must be eaten on a Monday or Thursday, and never on Friday.

All of these grains can, of course, be used to make a corn dolly, although Rye is the favorite. To use one of these in your magic, you don’t have to get hold of the grain itself. Most of you probably have some flour or liquor made from the grain at home, and that will do just fine. The culinary herbs might be the first place you look for a substitute. There are so many culinary herbs and spices with magical properties, so I thought I’d just mention some uses for a few of the more common ones.

Let’s start with Parsley. If eaten, Parsley induces lust and promotes fertility. It can also be used for protection. Parsley is also used in cleansing baths and to stop adversity. Thyme is used for sleep, psychic energy, courage, healing, renewing personal energy, and for warding off negative energy. Thyme is burnt to cleanse spiritual rooms and spaces, as well as to bring good health and courage to the home. It can be placed in a sleeping pillow to help repel nightmares. They say that a place where wild Thyme grows is a particularly powerful energy center.

Cinnamon’s properties include spirituality, success, healing, power, psychic powers, lust, protection, and love. When burned as incense, Cinnamon raises high spiritual vibrations, aids in healing, draws money, stimulates psychic powers and produces protective vibrations. Dill is something we Scandinavians use frequently when cooking. Magically, it can be used for prosperity, protection, luck and lust. It’s used in love and protection charms. It’s effective at keeping away dark forces and useful for a house blessing. Place some seeds in muslin, and hang in the shower to attract women. The scent of Dill is said to stimulate lust. Basil is used for love, exorcism, prosperity, sympathy, and protection. It dispels confusion, fears, and weakness, and drives off hostile spirits.

The lesson here is to take a look in your kitchen cabinets before you run out and buy something more expensive. There’s a good chance that you’ll find a substitute there.