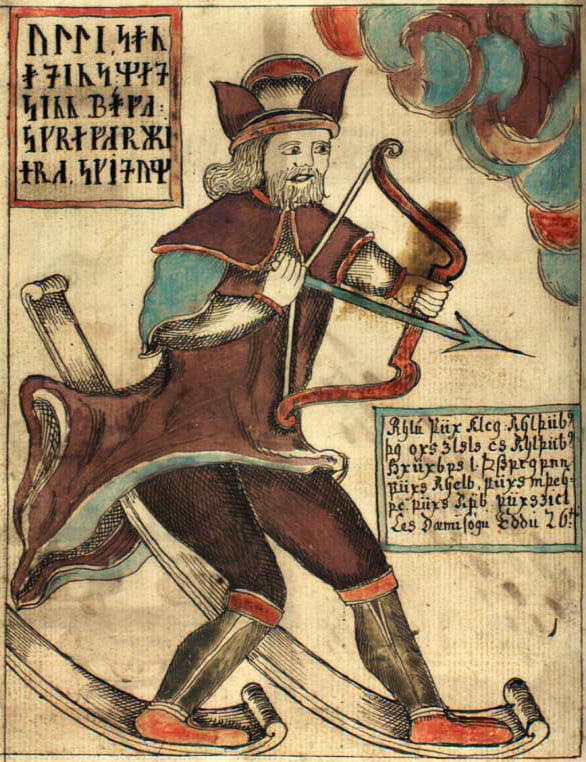 Ullr is strong, handsome, and a good archer. He’s also so good at skiing that none can compete with him. He’s sometimes called the skiing god, the archery god, the hunting god and the god of shields. He uses a pair of snowshoes (could be skis) made from bone. He’s also strongly associated with single hand combat. There are none, or at least not many, who are able to beat him in Holmgang.

His primary weapon is his bow. He is a skilled warrior and often invoked in battle. He also has a ring which may be used to swear oaths on, which applies to many gods. Ullr is the son of Siv and an unknown father. She had him before she was married to Thor, who then took Ullr as his foster son.

Some theorize that his father may have been Egil Aurvandil, who was Archer and a blacksmith. If Egil Aurvandil was his father then Ullr is one of the Vanir. He married Skadi after she divorced Njord. His residence is called Ydalar (“Yew Valley”) and is located on the outskirts of Asgard.

As a side note, one can mention that the yew was widely used for bows. The poets sometimes used Ullr’s name in kennings. As an example, they might call a shield “Ullr’s ship.” In the Edda, it says that «Ullr àtti skip that, er Skjöldr hét» – “Ullr owns a ship called Shield.” His name means “the honourable.” Other names for him are Ull, Ullin, Uller, Vuldr and Oller. There are many places are named after Ullr in Scandinavia, mostly in central Sweden and southern Norway. It suggests that he, at one time, has been a very important god, and in the Bronze Age, as sun-god, perhaps the most important, but that Odin eventually took over the position.

If you have any experience working with Ullr, let me know.

I’d love to hear more about how he’s interacted with today.