This fellow can get mischievous if annoyed 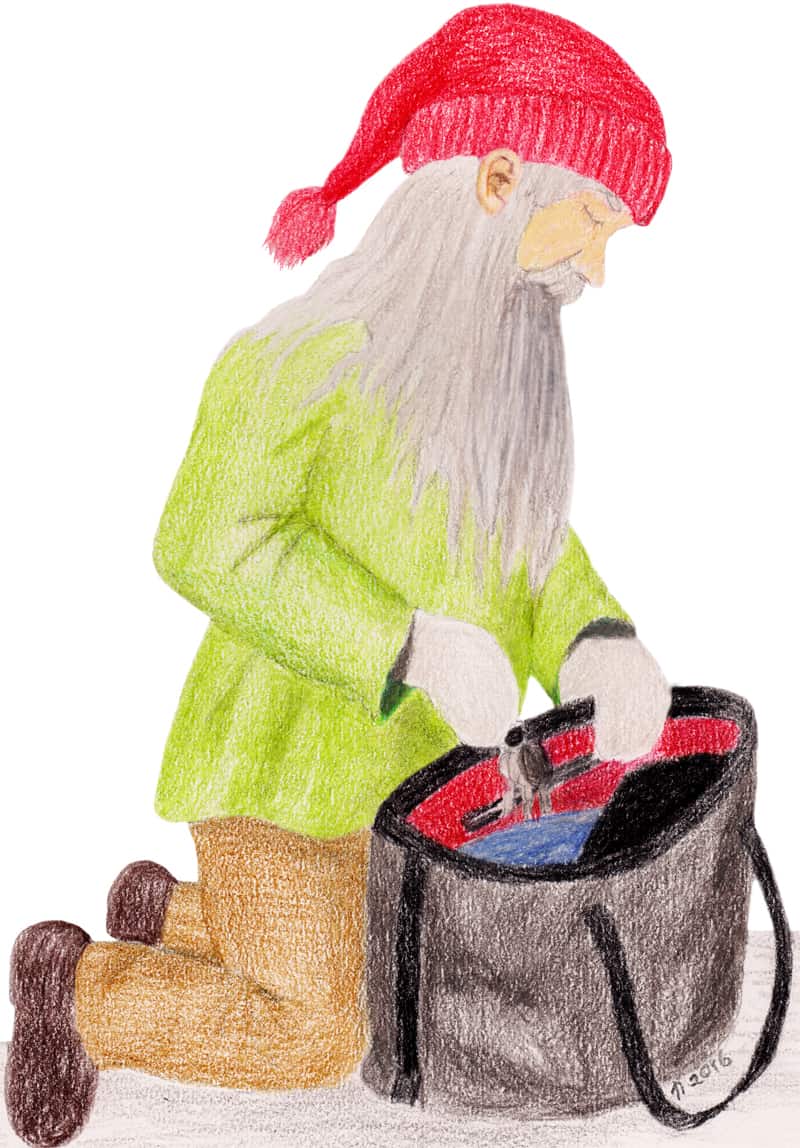 The tomte/nisse was often imagined as a small, elderly man with a full beard; dressed in the traditional farmer garb in earth tones with a pointy hat in red or some other bright colour.

He was connected to farm animals but his favorite was the horse. People believed that you could see which horse was the nisse’s favorite as it would be very healthy and well taken care of. Sometimes the nisse would even braid its mane and tail.

According to tradition, the nisse lived in the houses and barns of the farm, and secretly acted as their guardian. If you treated him well and took good care of the farm and animals, he would protect the family and animals from evil and misfortune, and might also help with chores and farm work.

He was a traditionalist in that he didn’t like changes in how things were done. He was also easily offended by rudeness, carelessness, lack of proper respect, and lazy farmers. His payback ranged from small pranks like a slap, or knotting the tails of cows, to more severe things like killing off the livestock or ruining the farm’s fortune.

If anyone spilled something on the floor in the house, it was customary to shout a warning to the nisse. You should also please him with gifts, in particular, a bowl of porridge on Christmas or Solstice Eve. This was his payment for the year’s work. If the nisse didn’t get his payment, he’d leave the farm or house or engage in mischief such as tying the cows’ tails together in the barn, turning objects upside-down and breaking things.

The Norwegian nisse likes his porridge with a piece of butter on top, by the way. And I still set out a bowl for him on the eve of the Winter Solstice. Since the nissefolk around here are Norwegian I serve it with butter, the Norwegian way.

These days, he’s mostly associated with the winter solstice and Christmas, or Jul as we call it here. He’s the gift bearer and the Scandinavian version of Santa. He doesn’t come through the chimney or at night, though. He comes through the front door and hands the gifts directly to the receiver. Although he’s been modernized, he’s still not the Coca-Cola Santa you see elsewhere. He may be dressed in red most times but he isn’t fat, less bright and shiny, doesn’t say ho-ho-ho, and his beard is longer.

Nisse is the Norwegian word, and Tomte is the Swedish word. I end up using either or. Some still blame the house nisse when things go missing in the house and can’t be found, until you no longer need them 🙂

So why am i telling you about the nisse?

I’m bringing it up because I like folklore and mythology, and because I’ve decided to make some nisse cards for the season. These will be funny images of the nissefolk in different situations.

It’s fun to share a nisse with your friends but you don’t have to share a real nisse, though 😀
Share a card instead so you don’t upset a real one.

The one in the image at the top is pinching the lady’s keychain to hide it because she forgot to give him his yearly payment – a bowl of porridge.

Here’s the place where I’ll share mine with you: My RedBubble category for these images

Check out the ones that are there. More will come as they’re created.