The Gate is Open by Katie Gerrard 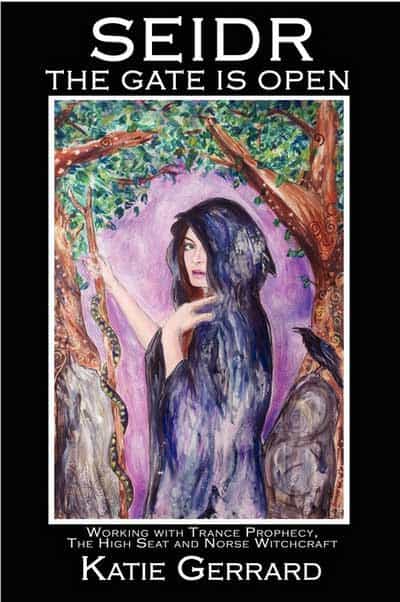 Time for a book review. This time it’s for the book “Seidr: The Gate is Open” by Katie Gerrard. The subtitle for this book is “Working With Trance Prophecy, The High Seat and Norse Witchcraft”, so that should give you a head start on what it’s about. It also shows a few of it’s limitations up front.

First the formalities, so you’re sure which book I’m writing about.

The book is written as a tool for those who want to learn from her experiences and path as a seer. But she is academically trained, and seems to put that training to good use.

She refers to Diana Paxon and Edred Thorsson, among others, but also the Eddas and Sagas. And she diskusses her sources, explaining what is viewed as controversial. She also describes how some groups, including Yggdrasil and Hrafnar, perform their seidr sessions.

I like the fact that she thinks the expression seidr should be reserved for the practices described in the sources, and not thrown about to describe every form of trance work. I also like that she doesn’t try to say “This is the only way to…”, and that she states that there is no instruction manual for seidr. Another thing I like, is that she didn’t leave out the destructive part of seidr. Some of the others do. It’s also good that she talks of honoring your ancestors, and that she suggests you should learn about the deities before invoking, working with or journeying to them.

What I don’t like as much, is that she says there’s a need for protection. That you need to cleanse the area, get grounded, and protect yourself from spiritual dangers. I haven’t seen this practiced in any of the sources I’ve read, and to me it smells Wiccan. She talks of things like casting “the circle of the Disr”, which is another thing I suspect is modern and brought over from Wicca.

When I speak of limitations, I mean that I feel it’s limited by taking the few sources we do have a bit too litterally, as so many do. It also doesn’t bring up using seidr to learn, to awaken lost knowledge, but focuses mainly on prophecy. It also seems that all journeys go to Helheim, which mine don’t. I’ve journeyed to many different places, of course including that. It also focuses more on group sessions than solitary seidr, which is mostyl mentioned in passing.

She also states that Thorbjörg Litlvolva in the rite on Greenland went beneath her cloak to prophecize, I found nothing of that when reading the text in the original language or the Norwegian translation. But maybe we’ve read different translations. If she did anything similar, I think she’d pull her fur hat over her eyes.

She says the often quoted line from Lokasenna reads “and you bead on a drum like witches do”, also naming chest and shrine as possible translations. But I’ve been told the word vett it’s closer to lid.

Some say that if you use drums, you should call it something else and not seidr.

If you want to know what others are saying about this book, or if you wish to buy it, check out Amazon.