Osteoarthritis: Shoulder MRI Results – Not Yet 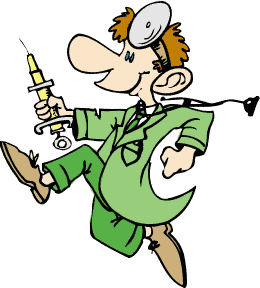 I was at my GP’s today, to get the results of my Shoulder MRI and to get my sick leave extended again. My shoulders aren’t getting better, they’re getting worse. Yesterday I couldn’t get to sleep until late because of the pain, and that’s despite the painkillers I’m on already.

Everything also takes a lot longer to do, which is even worse when your patience is as bad as mine. As an example, it takes me at least 20 minutes to hang one load of clothes. Something that used to take about five minutes. I can only say what I’ve said before: I wish I had a maid. It wasn’t the best of day’s for my patience either. My GP was an hour late today. He’s often late, but he’s good, and he listens to me. So I’m keeping him as my GP anyway. My shoulder problems are having an adverse effect on my back as well. I find myself missing my Chiropractor, so I asked my GP for a recommendation of a local one.

I also asked him for something fast acting when pain prevents me from sleeping. I’m no fan of taking more medicine than I actually need, but I can’t sacrifice my sleep over this. He gave me a prescription for some Tramadol, to use on those occasions. I’ve been doing physical therapy every day, to stabilize my shoulder joints, but that doesn’t ease the pain. If you’re having shoulder stability problems, and would like to know what kind of exercise I’m doing, you can check this YouTube video.

I’ve also been cutting down hard on my computer and Internet time. I can’t sit at home and do absolutely nothing. I would be bored out of my mind, and the house would turn into a garbage dump. I don’t think complete inactivity is good for my shoulders either. As for the result of the MRI I had last week, it hasn’t arrived yet. He’s going to send it to me as soon as it does arrive, unless it arrives in the middle of the holidays. He extended my sick leave until the 17th of January, and he’ll mail me a new appointment for another check-up. My rhinitis and asthma have been acting up lately. I remembered to tell my GP this time.

My nose is constantly swollen, and I’m coughing. I was wondering if it’s the dry winter weather, or if there’s something in the air. I do react to irritants. He said that since I’ve got a Vasomotor Rhinitis (I’ve had it for about 15 years), the weather is probably to blame. He gave me a prescription for Rhinocort to take care of the worst, and let me sleep without snoring. I’m going to be careful about using it this time since it’s what made the problem chronic to begin with. Before I left, I asked him to write me a new perscription for Paracetamol, since the last one has run out.

Between the GP and the PT, I called my boss to tell him my sick-leave was extended, but I couldn’t get hold of him, despite trying both phones several times. I couldn’t get hold of my other boss either. I left a message on the cell phone of the first one and called our help desk to ask Melissa to send an email to everyone. I then walked over to the PT’s office, to talk to him about the missing MRI result. Since the result wasn’t in, he didn’t have much to say. He took my number and said he’ll call if he heard anything. After I was done at the PT’s office, I called the financial department at work, to hear who I should send the papers to if the bosses are away. They said to send them to the salary department. But then my boss called me back, so I sent thet papers to him instead. I took a cab home, via the pharmacy.