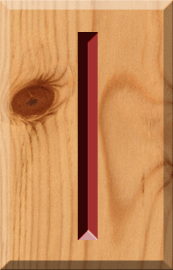 Since number 9 f the Rök Runes, the Ice rune, has kept its appearance from the Elder Futhark, I’ve allowed it to keep its interpretation. I have however elaborated a bit on it. The easiest part of the interpretation, is things being frozen, standing still, stagnation. But there’s also waiting, blockages, challenges, and frustrations. Being cold, inhibited, frigid, a lack of emotions, a lack of passion. The rune points to some kind of difficulty ahead.

On a more positive note, it’s a good time for planning, preparations, but not for action. Don’t try to force progress. Stop and organize your plans thoroughly. 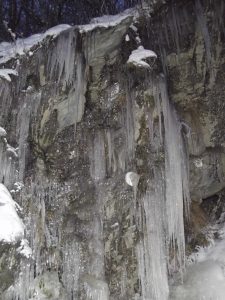 Although many see this rune as a pretty negative one, ice has its uses. Sometimes you need calm, stability and order. You might need to stop and organize your thoughts before acting. Maybe you’re stressed out and need a rest or meditation?

Ice can also force change. Just look at the typical rock face. The ice forming in the cracks forces it to widen, causes rocks to fall off, and thereby changes the rockface. In that, you might have to get rid of something preventing change.

Ice can also be rather beautiful. There are many examples of that out there. Both Nature’s own sculptures, and man made ones.

It can however also be dangerous. Just think about glaciers with their crevasses and the calving where it meets water. Ice bergs and sea ice making navigation of the polar waters difficult. Treacherous, thin ice on lakes, and black ice  on roads. To me, all these give the interpretation: proceed with caution.

Merkstave: Is can not be reversed, but can lie in opposition. One possible interpretation might be that you’re masking your emotions and pretending to be happy, pretending everything’s OK, when it’s not.

I hope this gave you more ways to look at Ís. If you want a reading, you’ll find prices and info here: https://lindaursin.net/library/

Should you require any kind of amulet, my shop is at https://lindaursin.net/magical-creations Feel  free to contact me on any of the social media channels I’m on, or by email.