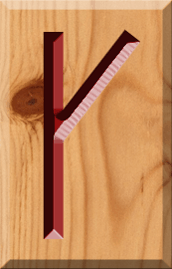 Because the 6th of the Rök Runes has changed quite a bit from the Elder Futhark version, I chose to change my interpretation to the same degree. I chose to go by the interpretations from the rune poems, instead of modern tradition.

In Old Norse, the word ‘kaun’ means boil. I’ve also seen it translated to ulcer or sore. In modern Icelandic, it translates to carbuncle as well as boil.  The Norse and Icelandic rune poems use the word in the meaning of a boil. Only the Anglo-Saxon uses the word torch for this rune.

The word ‘flagella’ in the Icelandic poem escapes me. Some have suggested it comes from Latin and means whip. That would make this line “whip the king”. Somehow that doesn’t really sound right.

My interpretation of this Rök Stone rune is (after being corrected by a friend of mine), disease, infection, inflammation, infected or poisonous relationships, self-harm. Back in those days when the runes were created, I imagine a boil was a more serious problem than it is today.

Back then, they probably only had red-hot needles, salt and fire. So the cure must have been just as painful as the boil itself. I don’t have any reliable sources that those were the (only) methods used to get rid of a boil. That’s just what I picked out of my own head. Today a boil might be lanced or cut open, rinsed with disinfectant and kept open to heal from the inside.

Even in modern times, boils are nasty. But dying from one is far less likely today. When in opposition, or Merkstave, Kaun would be the cure of the same disease. The red-hot needle which pierces the boil. Or maybe getting out of a bad relationship.

Get your reading here