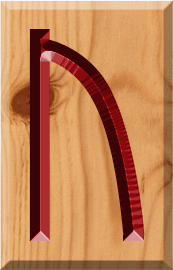 Ur is the second rune of the Rök Runes as well. It didn’t change much from the Elder Futhark either. But in the younger futhark, Ur had to represent several sounds (u, o, y, ö, w, v). That’s why I’ve changed, removed and added stuff in the interpretation.

Ur in the younger futhark symbolizes stability, strength, courage, protection, and security, new beginnings, positive, steady but slow progress, home and family, joy, happiness, comfort, harmony, and fulfilment. I also see it as a kind of primal force or life force.

If it represents you, you’re a happy, down-to-earth person who likes it at home and depends on family and traditions. You may have to be willing to sacrifice something to get something else. Remember to live in the moment and enjoy it. Don’t over-organize.

Merkstave: You have to find and overcome the obstacles to move on. You’re on shaky ground, make sure to get back to stability. You may have trouble enjoying positive things, or not able to see them as positive. It may also mean that you’re not doing what you need to do to be happy. It may also point to feeling rootless or isolated. 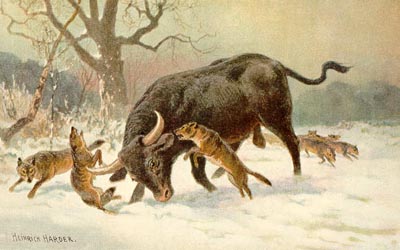 Ur stands for the Aurochs (Bos primigenius), a species of wild cattle which inhabited Europe, Asia and North Africa.

The aurochs is the ancestor of all domestic cattle. It was considerably larger than most modern domestic cattle (Bos taurus). Though the bull was previously believed to have a shoulder height of approximately 200 cm and the around cow 180 cm (Herre, 1953).  Scientists have since calculated a new height based on the length of the humerus (upper leg bone). They now believe that the shoulder height of the bull probably varied between 160 and 180 cm, and that of the cow was around 150 cm.

Though not extinct, the Aurochs survived in Europe until 1627. The last recorded aurochs, a female, died in 1627 in the Jaktorów Forest, Poland, and its skull is now the property of Livrustkammaren in Stockholm.

The aurochs bull’s
coat colour was black-brown with a small light eel stripe. The colour of
the cow was just as the calves’ colour
reddish brown. The bull as well as the cow probably had a light
zone
around the snout. The aurochs’ horns were pointed forward and were
curved inwards. Although the shape of the horn was very
characteristic for
the aurochs, there was some variation in the length, thickness,
curving,
and position with regard to its forehead. The udder of the aurochs
cow was
small and hardly visible. (Van
Vuure, 2003)

In 1920 German biologists, attempted to recreate aurochs. The resulting cattle are known as Heck cattle or Reconstructed Aurochs, and number in the thousands in Europe today. However, they are genetically and physiologically distinct from aurochs. The Heck brothers’ aurochs also have a pale yellow dorsal stripe, instead of white. (More…)

And my shop is at https://lindaursin.netshop