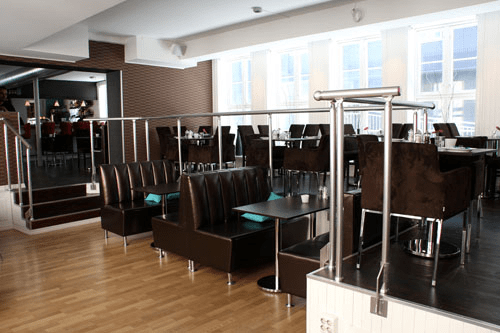 Yesterday evening, before I went to the Lisa Williams show, I had dinner at Bakgården Spiseri & Bar. I haven’t done a restaurant review before but this one deserved one.

The restaurant is at Kjøpmannsgaten 40 in Trondheim, Norway. Their specialties are tapas, pizza, wine, and cocktails. When possible, they use fresh and local produce.

The first thing I noticed was that it wasn’t very easy to find. It took a while before I saw the sign. As I walked to the front door, I saw their outdoor area. It looked nice, but since I was eating with a friend who has rheumatoid arthritis, I suggested to my other friend that we’d sit indoors.

Once we got inside, my impression was a pretty cosy, smallish restaurant. There weren’t that many guests, but that’s probably due to the fact that we arrived at 5 PM.

We were greeted, friendly and promptly, by the waiter. We sat down at a table for four, and the waiter came to remove one of the settings because we’d told him there were three people in our party. He came back with the three menus and we began deciding what to order.

The menu is in Spanish, with Norwegian translations. My friends ordered pizza. One ordered a Margherita (because she’s vegetarian), and one ordered the Serrano Pizza (Serrano ham and Rocket). Both were satisfied with the taste, although the one with the Margherita, who’s used to real Italian pizza, commented on the softness of the crust.

I decided to try the tapas because I can eat pizza anywhere, and when I can, I like to try something new. I had to choose something reasonably safe though since I was going to be stuck in the theatre for a couple of hours immediately after eating. I only ordered from the warm tapas and the dessert menu.

I was a bit worried about the lamb being too hot. I don’t normally eat spicy food, so I’m not used to it. But there was nothing to worry about. The lamb (which was from Røros) was wonderfully tender, had no trace of that ‘wool flavour’ you sometimes get and was perfectly balanced. You got the chilli taste, but only warmth, no real heat.

I’d never had squid before, but it was nice. It was very fresh, not rubbery at all. The potatoes tasted good. The only thing about them was that I might have liked them a bit crispier. The forest berries that I had for dessert were wonderful. The ice cream tasted like real ice cream, not like it was bought in a half gallon plastic tub at the local super.

It was, overall, a lovely meal. With this, I had a glass of Laroche Petit Chablis 2008, which I liked. I normally stick to Rieslings, but I liked the mildness of the Petit Chablis.

The bread which we had on our table was very fresh. We got our food and our check in good time. You normally have to expect to wait for a little when you eat in a good restaurant.

I have only good things to say about the service and the food. So I will return another day to try more of their tapas. I will probably do this on a day when I don’t have to play it safe 🙂