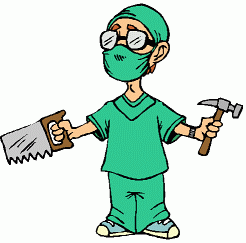 Some of you might want to know how the shoulder surgery went. Here’s an account of my shoulder surgery, and the meeting with the Labor and Welfare Service, which is called NAV here in Norway. Before the surgery, I had to wash my whole body with a disinfectant, which wasn’t easy, as our shower room was under renovation.

I had to shower outside, regardless of the temperature. The first shower was ok; it was in the afternoon, so it wasn’t that cold. But doing the same at 8 am was no picnic. We got there a bit ahead of time, so we had to wait outside the door to the surgery ward. The wait got a bit longer than expected because they were late. About 30 minutes late.

When they let me in, I was taken to a bed and asked to change my shirt to one of theirs. The male nurse, who was supposed to put a line in my hand, said the veins were too hard. Nobody else has ever had any problems with that, but he decided to move it to my elbow instead. I think his problem was that he didn’t tighten the strap enough.

The surgeon came to mark my shoulder and add local sedation to it. I have no problems with needles otherwise, but this one was huge, and he dug around in there, hitting bone more than once. And then he picked up another needle and did it again! I asked him if they were going to check for Osteoarthritis while in there, and he said he’d see everything. He didn’t believe they’d find any Osteoarthritis, since it’s very rare in the shoulders.

I recognize the popping and pain from my knees (and a number of undiagnosed joints), so I knew better. I was wheeled into surgery around 2 pm and moved myself onto the table; well it was more like a chair. They strapped my left am good and gave me a shot of something. The Anesthesiologist told me to say when I started feeling a buzz. As usual, that took longer than they expected as I have a resistance against painkillers and sedation, which was part of why I had to go without proper medication for about 20 years.

When I finally started noticing it, they put the mask on and put me under. The surgery went fine. It was for multi-directional instability and impingement syndrome. 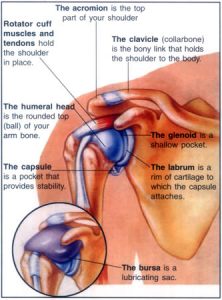 There was a positive “drive through sign” (which means the joint is lax). The antero inferior Labrum has some degeneration of the cartilage, and the Glenoid has degenerated cartilage with some Osteoarthritis at the edge (see, I was right!).

The Surgeon removed the Bursa, ground away an Osteophyte under the Acromion and part of the bone at the tendon. He also removed part of the tendon itself. This is to make the tendon run where it’s supposed to, and not get squashed. He also put two stitches through the Labrum and the Inferior Glenohumeral Ligament to keep things in place. He then folded the capsule by adding two stitches, to make it tighter.

It didn’t take long. I was wheeled in at 2 pm and by 3:45 pm I was sitting in bed, eating sandwiches, drinking tea, and tweeting about it 🙂 I’m under pretty strict instructions, because things can go wrong if I move too much. So I have to wear a sling day and night for three weeks. I have one week left now, and it hasn’t been easy. Patience is not one of my virtues. Here’s what they say I’m allowed to do within the limits of pain, when I take the sling off a couple of times a day to exercise the arm (and after I get rid of the sling).

Outward rotation < 30 degrees Flexion < 90 degrees Abduction < 70 degrees I’m not allowed to combine rotation and lifting my arm. No lifting! The flexion is, according to my physical therapist, only forward flexion. She gave me a couple of exercises to do at home. I’m going to her once a week right now.

Outward rotation < 45 degrees Flexion < 130 degrees Abduction < 90 degrees I’m not allowed to combine rotation and lifting my arm. No lifting! I’m not sure if flexion is restricted to forward flexion here.

Maximum movement within the limits of pain. But I have to stay within the normal limits of movement, or it becomes hypermobile again. This means I have to learn what normal movement is. I’ve got a checkup at Aleris hospital on the 8th of November.

I also had a meeting with the Labor and Welfare Service a little while ago. My employer attended via the phone. The result of that meeting was: I’ll have to decide what to do and tell my employer by January 31 at the latest because that’s when the process to end my contract starts. I should check out Hysnes Fort (rehab center), although I have no intention of being away from home for 4 weeks to

figure out something I already know.

What I want to do, what I’m able to do, and how much during a day I’m able to work, is something I’m perfectly aware of. My primary physician agrees that I will not be able to return to the same job, and he said it while my employer was listening. It’s nice to have a doctor that agrees with you.

My employer has no possibility to adjust my job further. They’ve done very well and have made numerous efforts to Nothing more is going to happen before spring as far as NAV (L & W service) is concerned. Then they’ll probably have me work with a counselor on what I want and what I’m able to do.