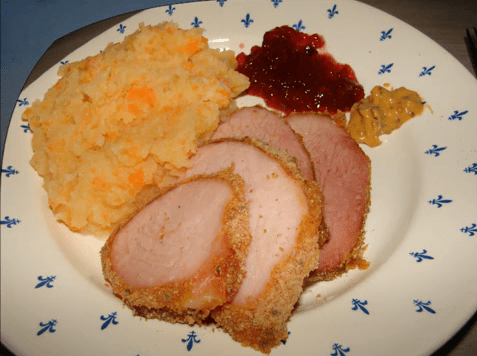 I thought I’d pick up on another Pagan Blog Prompt and share my plans for the upcoming celebration of Jól, Jul, Yule Christmas or what you may call it. As you may already know, I practice the old Scandinavian tradition (Fornsiðr, which you may know as heathenism, Asatru or something similar) in my own, modernized way. This means that I celebrate Jól or Midwinter with a Blót. Although this celebration was held on Hoggunótt (Jan 12) in the old days, I choose to celebrate on the day of the solstice. Simply because it’s more practical for me. Since the solstice (in Norway) is at 00:38 on the 22nd this year, I’m celebrating on Wednesday.

If at all possible (and I have already bought it), I will have Rice porridge with sugar, cinnamon and milk for my breakfast. This is a tradition I created for myself many years ago, and intend to keep doing. For lunch, I’ll bring something light. Haven’t quite decided on what yet. For dinner I wanted to have ham, glazed with mustard and honey. But it doesn’t seem to be possible. Simply because I refuse to pay a lot more for a small ham than you do for a ham that weight 2 kg/4 lbs. They’re charging about NOK 200 (€ 25.38, £ 21.5, $ 33,41) for a small ham. I have to get a small one, since I don’t have room in my freezer for a large one. It’s just me and our daughter who eat ham that isn’t smoked. So there would be a lot of leftovers. I guess I’ll have to come up with something else, but I haven’t decided what yet. Suggestions are welcome. Same goes for lunch, drinks and evening snacks. I also have to get something else to drink. The 21 liters/5.5 gallons of mead I made earlier this year, hasn’t fermented properly, so it still tastes like yesterday’s leftover beer.

On to the more spiritual part of the day. I really hope to be able to do a proper Blót this time. They are often forced into a smaller, simpler format by external circumstances. In the morning, on my way to work. I will great the returning sun as it rises. Probably doing it on the train, so it won’t be a vocal greeting. Just a quiet ‘Ek heilsa þig Sól. Velkomin aftur‘, I guess. If I have the time, and I’m able to find a suitable version, I’m reading one of the myths to my daughter. As long as I can keep an eye on them, I’ll keep candles burning all day and until I go to bed. Before I perform my ritual, I’m also going to light a fire in the stove and put the grid in front so I can look at the flames. The Blót itself will be in the evening after the others have gone to bed. I will be holding inside because of the weather. It’s really cold at the moment, about -18 C/-0.4 F, and I don’t want to freeze my *** off.

I plan to follow this rough outline for the ritual: Declaring the vé This means you declare the space as sacred. I will do this by calling the four Dwarves (Norðri, Austri, Suðri, Vestri) and then I’ll use the declaration from Bifrost (The Norwegian Asatru Fellowship):

If you need a translation, try Google Translate. I know it isn’t that good, but you should be able to get an idea of what’s said.

Invocation This year, I’m calling Vittra, Thor, Frey, Freya, Frigga, Eir and of course Odin. The reasons I keep to myself. The invocation will state who and why. Vittra is a collective name where I come from for all nature spirits like Elves, Vettr, Dwarves, Nisse etc.

Offerings I will be offering some beer to Thor, homemade bread to Frey, some perfume to Freya, a flower to Frigga, herbs to Eir and some wine to Odin. The reasons for calling them will be stated with the offering. The liquids will be poured on the ground, and the solids burned in the stove. Freya’s perfume will be left to rise into the air.

Reading or other performance I haven’t decided what to do about this section of the blót. I’m sure I’ll think of something before Wednesday, but suggestions are welcome.

Toasts I’ll do toasts and a tribute to those I called, to Sól, and to the ancestors. each toast will be followed by a short greeting. Since I’m doing this alone, there won’t be much of a ’round’ of toasts. I’m using one of my two drinking horns this time. I’m hoping to get hold of some mead, but if all else fails, I’ll buy some white wine. Even if beer would be the obvious choice, I’ve never learned to like it, and I think it’s best to offer something you like. What’s left after the toasts will be offered to the ground in the name of the Vittra.

Closing I’ll invite the invoked powers to the Gilde and thank them for taking part in my celebration.

Gilde As a Gilde, I’ll have some snacks and a glass of wine. Since it’ll be pretty late, I know I won’t feel like eating something heavy. During the Gilde, I will offer a toast and a tribute to the animals whose lives have been taken so we can eat.

Additional and traditional offerings I will be leaving something extra outside for the birds and squirrels (dried berries, nuts and seeds), and something for Sleipnir. I’ve got some lovely green grass I dried this summer. I will also keep some of the porridge to place outside for the Nisse. He will of course get a good lump of butter on top of his porridge, even if I don’t eat it that way. Since the Nisse around here are Norwegian, I’ll serve it the Norwegian way 🙂 Some of the dinner will be left on the table for the Vittra and ancestors. That’s about it really. I’m playing with the idea of continuing my celebration all the way to Hoggunótt by doing something Jól related every day.

Next year Next year, I intend to have a number of friends over in December for an iron age inspired dinner. It will resemble the Swedish Jul dinner more than the Norwegian one. Which means that there will be a larger number of different foods to choose from. There will definitely be a ham on the table, and if I’m able to get hold of it, Moose ribs and a slow fired Moose steak.