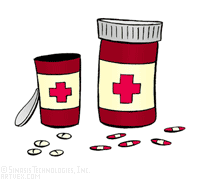 I’ve had some issues caused by the osteoarthritis medication, so I took a break from them. Something I shouldn’t have since I couldn’t’ sleep because of my shoulder. So I talked to my physician on the phone. He understood why I did what I did, but suggested I shouldn’t stop completely. He’s known me for several years and knows how living with pain affects me.

So he suggested I’d try 100mg in the afternoon, so I’d at least get some sleep. I might have to increase the dose, but I hope that 100 mg is enough to get by. I used to take 150 in the morning and 100 in the afternoon. When it comes to painkillers, less (when possible) is always better.

He also wanted me to pay close attention to my shoulders until next Friday when I have my appointment. It sounded like he was OK with sending me to ultrasound. I hope they can check multiple joints while I’m there. That would save me a couple of trips. Not to mention the amounts of bureaucracy.

He said that the risk of cancer is remote. That’s when you’ve had problems for years, but I was right to pay attention to that. we’ll have to continue to keep an eye out. I explained to him that constipation is worse on the mood than pain, and he understood that. He also said that there were no better alternative medications to try. I’ve tried almost everything there is, and most things don’t work at all on me, or work less than over the counter drugs.

I’ve been really cold and light headed all day. Hope it gets better tonight. My shoulder still tingles, but that should pass when I get home to take that pill. I took a nap on the train to work, and I think I’ll do the same on the way home, if possible. I need my sleep. So you won’t see much of me after I leave this railway station bench and head to the train. I’ll probably log on to check messages and replies before going to bed, but that’s about it. I went by the library on my way to the train, so I’ve got a lot of books that need reading as well.