No Power = No Cooking 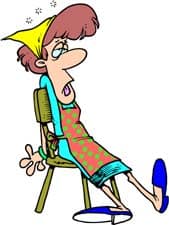 Our house and a number of other houses were without power for four hours today. As you can imagine, that isn’t very practical when you have a lot of cooking and housework to do. No power means no cooking unless you have a woodburning stove and I don’t.

I called the power company after the power had been gone for about an hour. The operator said they’d had a number f similar calls already, and that they were working on it. They had to get to a number of physical locations and throw some switches.

The power company called me back around noon and asked if my power was back. I checked, but I only had something like 1/3 of the voltage. Something which couldn’t be observed on any of the newer light bulbs. Only the old ones showed any light at all, and that was just a faint orange shimmer.

They came by around 12:30, and quickly determined that the fault wasn’t here since the water company called just then with the same issues. Just after they left, I lost power completely again. When I called them again, around 2 PM, the operator said they had located the problem, and were working on it. She expected them to be finished soon.

5 minutes later, the power was back, and I could get on with my cleaning and cooking. When you’re having joint problems, having to do everything in half the time doesn’t really help. Oh, and one more thing. My DGL router died on me, so I had to fix my Internet connection as well.