New Phone and Photos from Trondheim 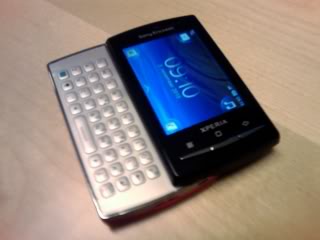 I got a new phone yesterday 🙂 It’s a Sony Ericsson XPERIA X10 Mini Pro, and it’s red. For once, I have a phone that isn’t black! The reason for this is first and foremost that the red one was cheaper 🙂 but I don’t mind the colour at all.

Last night I only imported my contacts, learned how to set the alarm, and charged the battery. Today I’ve done the settings for Internet and MMS and installed the software needed for USB transfers. I still have to update it, decide on a ringtone, a theme etc.

Later today I’m also going to look up some suitable Android apps. I don’t really feel like setting it up for Facebook and Twitter since I don’t want it to go on the Internet without me manually doing it. It’s a shame not to use the option when it’s there, but data transfers via phone aren’t free, so that’s the way it has to be. I took some pictures walking to work through Trondheim this morning to test the camera.