As many of you know, I watched Lisa Williams in Trondheim on the 12th of September. The show took place in Olavshallen and started at 7 PM. I was seated on row 9, so I had a good overview of the stage.

Before the show, the projected clips from the shows that have been broadcast on TV. On the stage, there was a chair and a small table with flowers on it. Lisa came out onto the stage in a blue dress and a black jacket. She had a new hairdo and colour, at least for me. Her hair was dark with red accents. She looked good.

She started off by talking about languages, and that it doesn’t matter that she doesn’t speak Norwegian and that the spirits may not speak English. There is no language barrier in the spirit world. She apologized beforehand for any mispronounced names.

She said she normally tries to learn a little bit of the languages when she’s abroad, but said that she hasn’t been able to get a handle on Norwegian. That’s perfectly understandable. I’m Swedish, and I had to twist and turn quite a bit to learn Norwegian, even if they say our languages are pretty similar.

Lisa Williams Live is coming back to Norwegian TV next year. Then they’ll include clips from Norwegian shows as well.

She’s got a new book which will be published on the 1st of March next year. It’s called ‘Survival of the soul’ and deals with what happens when we die. This book can be pre-ordered from Amazon.com. It will probably be translated into Norwegian, and Lisa hopes she’ll get the same translator as last time.

She spoke briefly about the crystal ring they were selling outside. They launched it in Bergen this year, and it has an amethyst and the text ‘I believe’ on it. This is because Lisa and many other mediums, had to hide her abilities from others, and it’s a reminder to believe in yourself. She plans to come back to Norway next year to run a teaching program. If you’re interested, you should sign up for her newsletter to get updates.

The stage had a couple of drapes with flowers and bubbles. Lisa pointed to the bubbles and made a comment about confusing them for orbs. She said it was OK to take pictures before starting. But when she started her readings, she needed cell phones on silent and no cameras because they interfere with the connection.

She showed a piece of paper and said that she’d taken down some messages before the show and that these would be read at the end. Someone on her staff had written them in Norwegian as a joke. Fortunately for her, they were written in English as well. She said that she’s travelling with two men, and they behave like her brothers. They pull pranks on each other all the time. She said that the messages would be published on her site and that she might post them in Norwegian as well.

She described the way she finds the person the message is for and said that it’s sometimes very specific, other times not. So she asked us to make a clear sign if we felt like she was referring to us. Too many are shy and look at their feet when they recognize something, but then they run the risk of her missing them.

She told us a story about a sceptic who was once called upon, and who she finally got him to acknowledge that she was speaking to him. Like she said ‘There’s no escaping L-dub’. She asked us to remember that it isn’t our gut or our forehead that does the talking, so we should speak into the microphone, and speak clearly. The microphone doesn’t bite, she said. She also asked us to forget about any spilt spaghetti sauce that might be on our shirt. She needs interaction. This means real answers, communication, not just ‘mhm’.

In the middle of it all, she asked someone ‘Can you wait a second’. There was a very pushy spirit trying to get through. She explained that several spirits might work together for a reading. That they might share a message. So if we felt like part of the message was for us, it most likely was. Before she started doing the readings, she asked if there were any children in the audience. The reason for this was that she might have to filter the messages for adult content. There was one child in the audience that night. She also said secrets aren’t safe. We shouldn’t ask the spirits to come through while in the shower, or in other embarrassing situations because they will see that.

She finished her intro by saying that she’d be in Oslo the next night. The first reading involved someone’s son. A pushy but charming man. Lisa first got something about a grey, or dark t-shirt. She then got something about a tattoo. They had brought his grey t-shirt and his sister was getting a tattoo on her wrist the next day. Lisa commented that it might get a bit ‘Late Night with Lisa Williams’ sometimes, before going on with the next reading.

Before the next reading, Lisa made a comment about hating peas. The third reading was about a little girl who had been ill. There was something about a bike as well. She said that she didn’t like the hospital, but that she was happy no.

Lisa asked if they were planning another child. The mother said they’d talked about it. Lisa told them to talk some more because the daughter said she was coming back, but that she couldn’t do so before her mother had let go. She said she’d come back as a boy. Lisa said you can recognize people that come back in their eyes.

This girl helped another girl come through. Lisa saw wheels around her, and that she’d been difficult to understand. This was a seven-year-old who’d been in a wheelchair. Lisa spoke to the mothers of these girls. The seven-year-old girl was with her aunt on the other side.

The next reading was for a man who’d seen Lisa’s show in Bergen as well. She got a pain in the head, something about dying in another country, and then America. His brother had died in America. He died from a gunshot to the head. Lisa said that although there had been attempts by everyone to make this something it wasn’t, the brother was the architect of his own death. The man’s mother, his father, and his wife’s father also came through.

For the next reading, Lisa got the name Astrid. She said there was cancer in the picture, smoking, and someone who was a bit of a shoe freak. A woman named Astrid was who the message was for. Lisa said she could smell the smoke, and that the mother was smoking now. That she loved her smokes and her food. She said the mother had huge breasts and panties, and that she’d hang her panties so that all could see them. She gave the daughter the message that ‘The shoes don’t help your knees’. The mother like everything neat. In the middle of everything, Lisa got the message’ Please don’t sing’. This was for the daughter again. her mother had also said ‘Your father’s here’.

They had the kind of relationship where they had a friendly banter between them. He was a proud man with a lot of inner strength. She was ‘Daddy’s girl’. There was the message ‘Celebrate your birthday’. This was meant for Astrid’s daughter. He also said that he has the dog. Apparently, this was Astrid’s sister’s dog. There was also a man with his trousers up under his arms, and this was the twin brother of Astrid’s father. The reading ended with the message that someone needs a new bra. That or someone’s having a boob job.

The next reading was about a vivacious and charming woman. She had a sassy look. She liked to sing and the message was for a sister or a friend. There was something in the chest area which had spread to the pelvis. The sister was in the audience. She said that her sister had died from breast cancer which had spread. The dead sister talked about her getting the boobs in the family. She also talked about being with her mother who picked her nose. She died too young at 54. She asked them to say hello to her daughter via Facebook.

The living sister’s husband, who died from cancer, came through to talk to his daughter. He said he comes to them in their dreams, but he’s sorry he can’t speak to them there. He also went too young. He said it’s OK to have moved on, and that he loves his daughter’s art and the writings of his wife. His son has his watch, which has stopped. He didn’t mind this, but he asked them not to throw it away. The father said he’d be at the wedding in December, and that he wanted the daughter to have a perfect life. 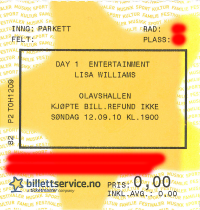 Lisa then read the messages she’d taken down earlier. She didn’t read them in Norwegian though. She said these would be posted on her website, but they aren’t up yet. She said she’d be back in Norway about the same time next year. This will be a longer tour, and it will include a teaching program.

It was a great show. Very entertaining with lots of humour. I got the ticket for free, which is the reason why I could go. And no, I’m not going to tell you how of from who I got it.

Lisa is a down to earth woman and one of the few mediums that seem trustworthy to me. I’m a pretty sceptic person otherwise. She’s able to communicate details that would be impossible for her to know, without being in contact with the spirit in question. She’s also very charismatic, friendly and caring.