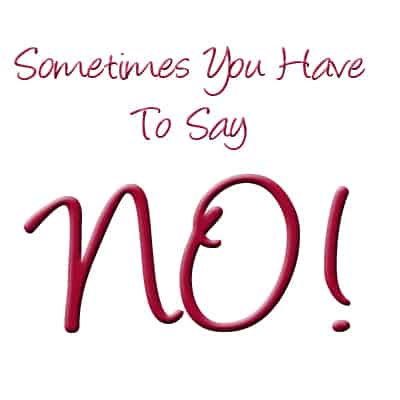 Do you have problems saying no to things that don’t serve you? Do you find yourself doing a bunch of stuff you really shouldn’t be doing, just because you didn’t say no? Learning to say no to what really doesn’t resonate with you, and to those tasks that aren’t yours to begin with, is really important.

If you constantly say yes to doing things for others, you’ll burn out fast. Don’t use unclear messages either. It’s very easy to get stuck with a task, regardless of how you feel about it, if you say things like: “I’ll check my calendar and get back to you” “Maybe later” “I’ll think about it” “We’ll see” If you leave your answer up to interpretation, you’ll get stuck with it. Just say no.

Don’t beat around the bush, don’t try to sugar coat it. Say no in a way they can’t misunderstand. Put on your big girl boots and put your foot down! I’m not telling you to be rude or insensitive, and I’m not saying you should say no to everything, or that you should say no to kids, your partner and friends, but when it comes to tasks that clearly go against your essence, the ones that rub you the wrong way, that you instinctively would avoid.

Don’t be unclear, say no in a way that can’t be misunderstood as saying you’ll do it. You really have to keep your goal in mind to be able to get there. If the task isn’t yours, if it doesn’t serve you, if you hate it, say NO!