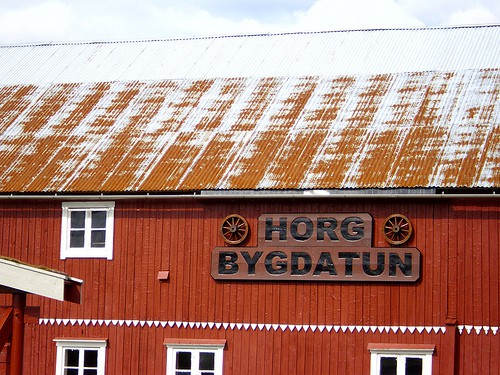 A while ago we walked the Culture Trail at Horg Bygdatun. It’s located at Hovin, and about 24 km (14.9 miles) from where we live. It took four and a half hours to walk the trail, even though it’s only 5 km. It would probably have gone faster if we didn’t have the carriage and our three-year-old daughter with us.

The trail has a lot of hills and is really too hard to walk for a three-year-old. That’s why we brought the carriage. But we shouldn’t have. We didn’t know that there’d be stairs on the trail. The map and the brochure said nothing about stairs. The site is an old farm, which eventually evolved into a collection of many buildings and objects. Here you will find a large collection of artifacts and tools, a shoemaker’s house, a watchmaker’s shop, a forge, a mountain pasture, and much more.

They have several sites with Petroglyphs. One is of a boat, one is a set of footprints, and another is a mixture of symbols. All of the sites have signs that explain how it was diskovered, and clearly show what you should be looking for. Which is good, because since they’re not allowed to paint them anymore, it’s rather hard to see some of them. The picture below is the first of a number of sites with Petroglyphs. This one is a boat, and they’ve taken a pine tree with the same shape and hung beside it. 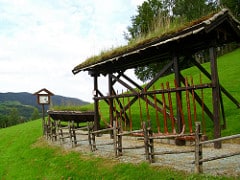 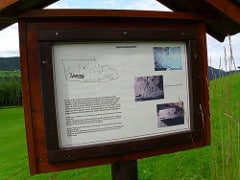 There are over 30 signs on the trail, all of which are in perfect condition, and easy to read. All these signs also have an English version. So foreigners shouldn’t have any problem understanding what they’re looking at. The signs are very informative, but maybe they’re all not as necessary.

There are also signs for each of the four major types of trees that grow here: Pine, Spruce, Birch and Rowan. Although these are also informative and speak of what the tree was used for. They don’t quite fit the theme of the rest of the trail.

To get to the Culture Trail, you have to walk up a steep path. They’ve made it a little easier by going zigzag up the hill, and adding resting stops with grills at almost every turn. The picture on the left was taken at the top of the first hill. Before you enter the trail. There are also several stone Elves, placed by the side of the path, that Lilith found rather funny. 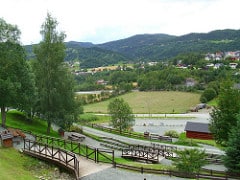 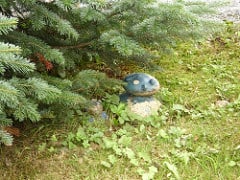 The culture trail starts with a steep hill where they’ve put down steps to make it easier to climb. But although our carriage was light and had large wheels, it was very hard to walk up the hill with it. Even though our daughter walked up the hill. Unfortunately, we started the trail a bit early, so we all stepped into a marshy area and got our shoes and socks dirty and wet. 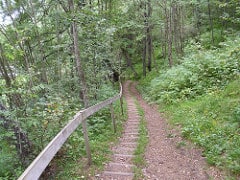 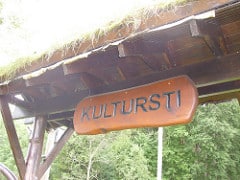 When you get to the conglomerate wall, there’s another surprise for those who have brought carriages. 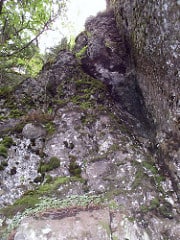 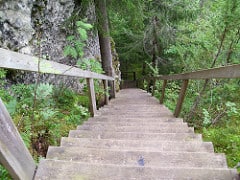 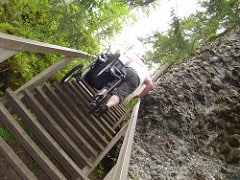 Yes, another set of stairs. These were even steeper and turned a couple of times. I’m glad I didn’t have to drag the carriage up there. My husband did.  The view from the top of the stairs wasn’t bad. 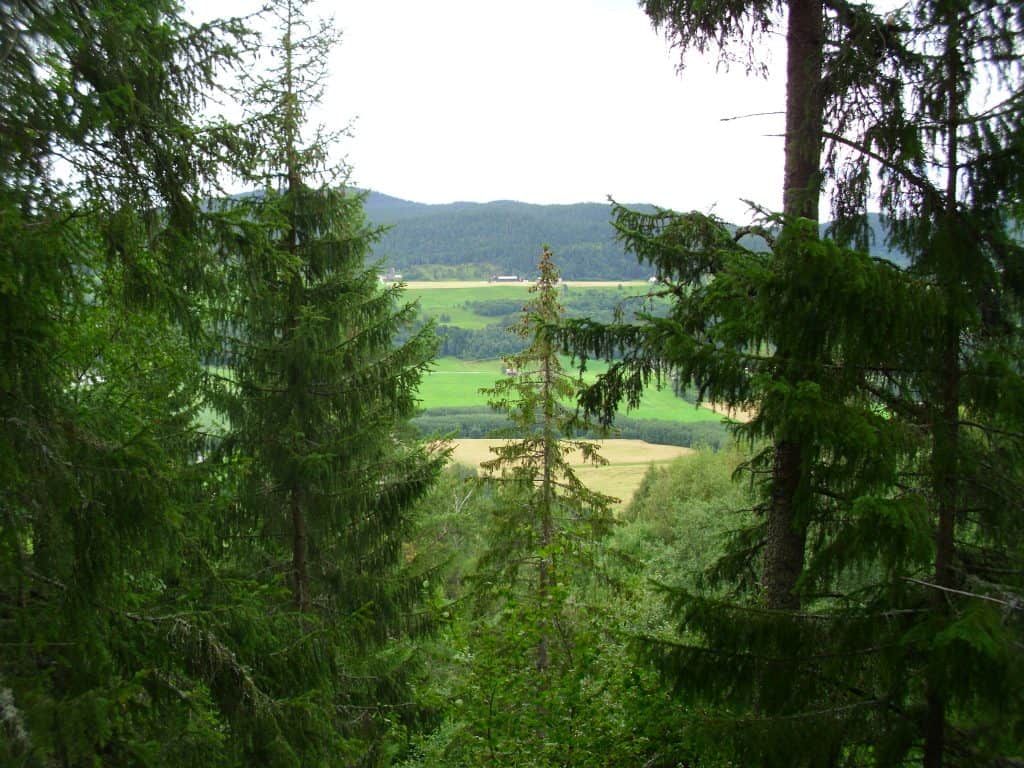 Among the other things to see along the trail, is a stone quarry, friendly cows, a trapping pit, ice age streaks in stone, and a tar-making stand. 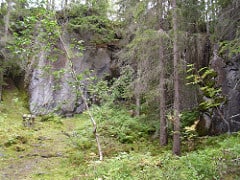 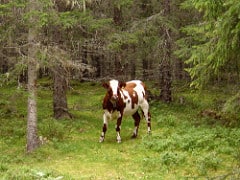 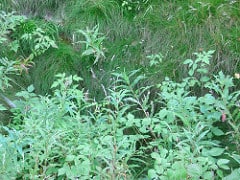 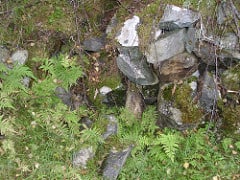 And of course, more Petroglyphs, and many other things. 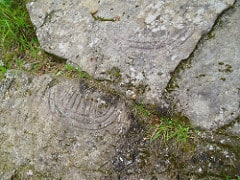 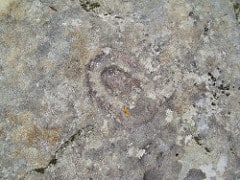 As you walk back down towards the village, there’s a Chieftain’s Grave. On top of the mound is a Bauta. 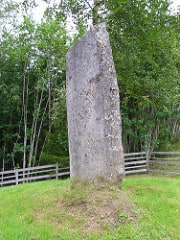 The grave itself is closed, but I managed to snap a shot through the grid. 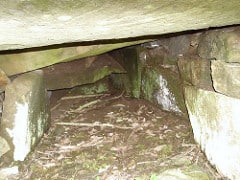 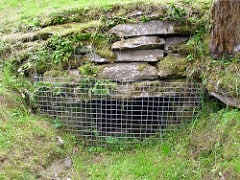 The grave is from the Merovinger Age, about 400 CE, and was diskovered in 1934. In the grave were two well-off people, a woman and a man. It’s unclear which kind of relationship they had.

There were lots of berries by the trail. Both Raspberries and Blueberries. I also photographed a number of plants and mushrooms. I plan to use these for illustration in later articles, so I won’t post them here. If you want to see them, they’re on Flickr Just had to show you a pointless sign. 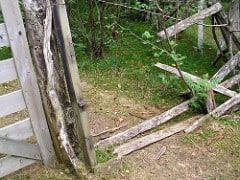 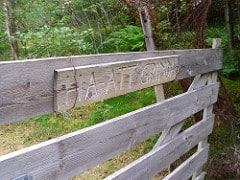 The sign says ‘Close the Gate’, but as you can see, there’s really no point in doing so.

At the end of the trail, you return to the scene, with the Capercaillie on top, and the mountain pasture. 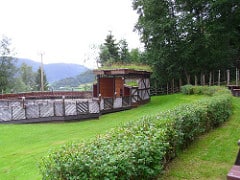 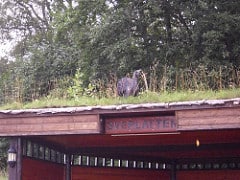 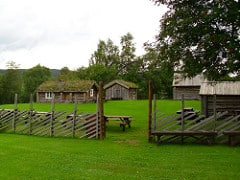 At the end of all this, we got home with brown socks, wet shoes, chafes, and aching muscles. But also with a lot of pictures. 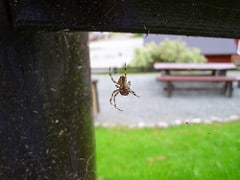 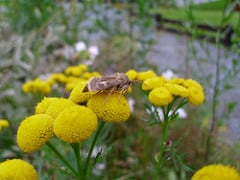 I’ll be making a video to showcase this as well, but it will be in Norwegian.