Greetings! I am delighted for the chance to write a guest post on Linda’s blog, and to share my art and family tradition. I am a designer and painter of “Pennsylvania Dutch” hex signs, though I have never lived in the state of Pennsylvania, nor is my heritage Dutch. For those unfamiliar with the art form, hex signs have been painted on barns, primarily in Pennsylvania, since the early 20th century.

The painters of these designs, such as seen to the left, came to the U.S. from Germany in the 17th and 18th centuries. The term “Dutch” in the name of the art is a corruption of Deutsch or German. There is little agreement among folklorists, and even among the folk themselves, as to the origin and meaning of the art and the designs. Many of the signs, however, have elements that strongly resemble decoration found on buildings in Europe, such at the Cathedral of San Paolo Al’Orto in Pisa, Italy, which was completed in 1086, below.

One of the most common symbols, earlier called the “morning star” and said to be a sign of Christ’s ascension and life ever after, is seen both in the image, above, and in the much earlier artifact, below. This sword scabbard belt buckle dates from circa 400 A.D. So, what of these ancient symbols, brought to America and painted at the peak of the barn? I was taught by my grandmother, who learned the art from her father. I know little more of the history in our family than what she told me in the few years we had together after she began instructing me in the art.

Grandmother, by the way, did not paint on barns (she was born in 1888 and it would have been unseemly for a woman to climb a tall ladder in her day) but pied her art much as the Norwegian painters of rosemaling — to decorate furniture and items in her home. She also worked the signs, on paper, for those in the neighborhood who would visit her with their requests. You see, Grandmother taught me that these designs were not “just for pretty” but were powerful talismans, prayers, blessings and invocations! 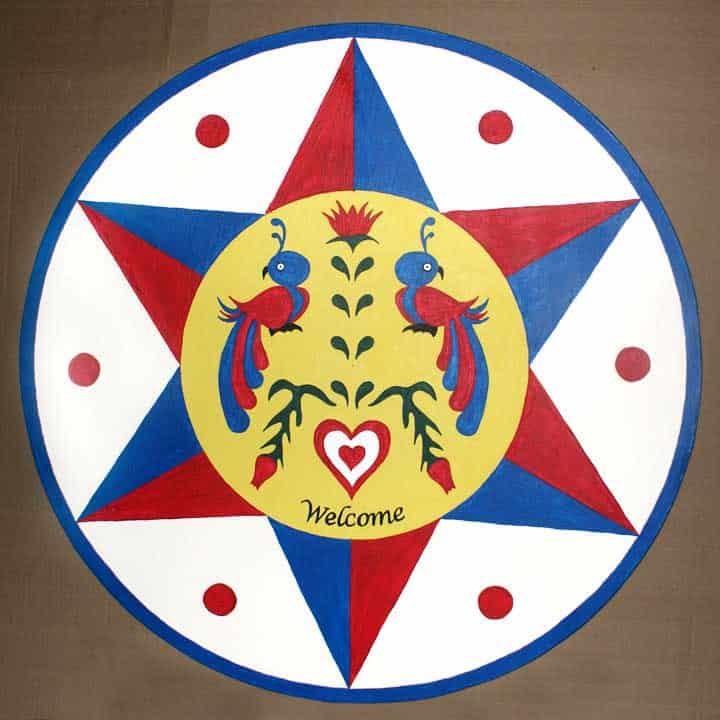 I was taught to draw, and then paint, each sign from the center out, setting the point of my compass deliberately to draw the first circle and mentally placing God at the center.

As I adjust the radius, I am mindful that this represents the reach of God’s power and will, and that all that is worked within the circle will be within His domain. Of course, we know this “radius” is infinite, but that would make a very hard piece to paint! Each of the lines, images, and designs is placed mindfully and with the intent to bring the blessings thereby represented to the owner of the sign. In my sign, left, the owner had asked for a sign of welcome, but incorporating protection for his home. I placed the traditional welcome sign within the six pointed star of protection.

Since the middle of the 20th century, most of the signs created and seen on homes and barns across the United States have been commercially produced by silk screen printing onto metal, or more commonly, Masonite. These signs were first produced by Jacob Zook in Paradise, PA in response to an increasing tourist industry. Now, several commercial companies mass-produce his designs, which are sold in tourist shops across the state. These signs are not durable enough for the traditional outdoor display, though, and I have seen several examples of warped and peeling signs in my corner of the state of Maine, brought home from vacations in “Amish country.”

Just to set the record straight, though the signs are often seen in areas of the U.S. with a large population of Amish folks, they do NOT paint or display them, as they eschew decoration in most forms. Some of their quilt patterns do resemble hex sign designs, but they do not attribute any higher purpose to the quilts beyond warmth. The German descendants and neighbors of the plain Amish, those who DO display the signs, are known by extension as the “Fancy Dutch.” The sign to the right, a very traditional sign is said to call for the blessings of love and a happy home. The symbolism of the hearts is obvious; the tulips are representative of a lily, which is said to represent faith. 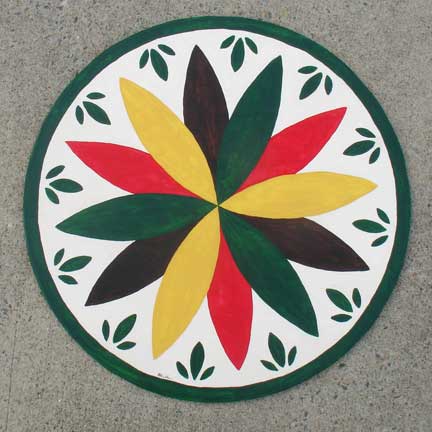 A very common style of design uses variations on the “hex rosette” (seen previously as the morning star). This doubling of the design, giving 12 petals, is called the Blessed Year. There are other similar signs; any time you see a “blumme” (flower, like this one) or a “schtanne” (star) with 12 points, it is speaking to the cycle of the year. 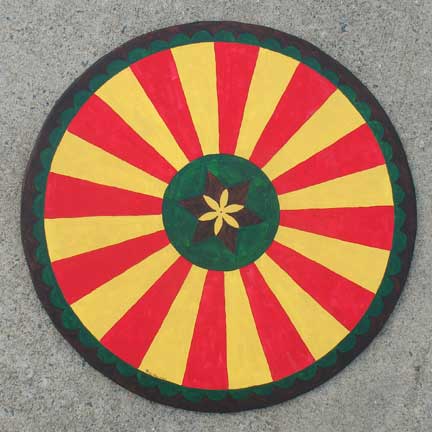 Many of the signs have multiple layers, stars within stars, symbols within the circle along with the stars or flowers, as the blessings are built. I feel that the more simple a sign can be, the more powerful it is.

Less distraction from its focus. It is not uncommon to see more than one sign on some of the older barns; sometimes they are identical and sometimes they are not. I prefer to use multiple signs where multiple blessings are needed, rather than to “muddy up” the work with too many designs in one.

One of my personal favorites is the Double Creator’s Star, said to “bind the blessings of prosperity.” In the version to the left — painted on a local rock from the farm where it lives — the nested six-pointed stars are enclosed in a star of protection (year round… count the points).

The outer circle is painted blue to represent the sky and the heavens. I also use the Double Creator’s star as the logo for my art. I guess it must work, too! Since I started using this as my logo, there are times when I can’t paint fast enough! If you would like to try your hand at drawing and painting some of these traditional blessings, there are resources on the Internet that can give you various ideas on the meaning and symbolism.

On my website, I have included instructions for how to bisect both lines and angles. The geometric aspects of the designs are all constructed using the “compass and straight edge” of our days in geometry class. In fact, the hex rosette is easily “doodled” using just a compass, with no change to the setting for the radius of the circle. Remember, though, it’s just a doodle unless you do it with intent! One of the most popular designs, which requires bisecting both lines and angles is the Natural Balance sign. This sign calls for the blessings of sun and rain, in balance, not only in the garden but also, metaphorically, in life.

I often paint it on a disk of sunny yellow with the earth star in shades of brown and green. The drops represent the rain and the 4 disks with orange points and rays, the sun. Right is another popular variation of this sign. 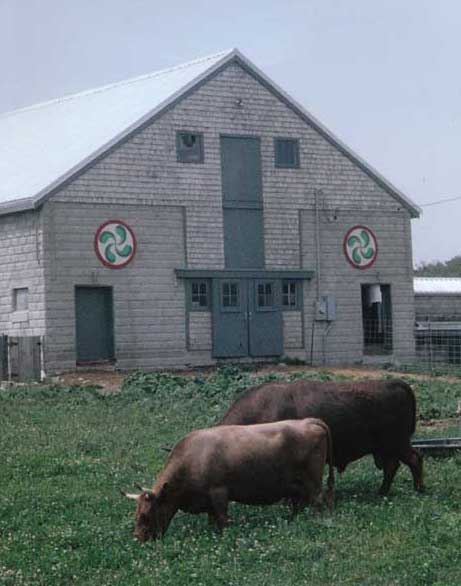 These days, very few signs are painted directly on the barn, or on a house or garage. We are far too mobile, I guess! Signs such as mine painted on exterior plywood in an appropriate thickness for the diameter of the sign (from 1/2″ up to 3/4″ for signs from 1 foot to 4 feet in diameter), well-primed front, back, and edges and painted with a quality exterior house paint should last for years. 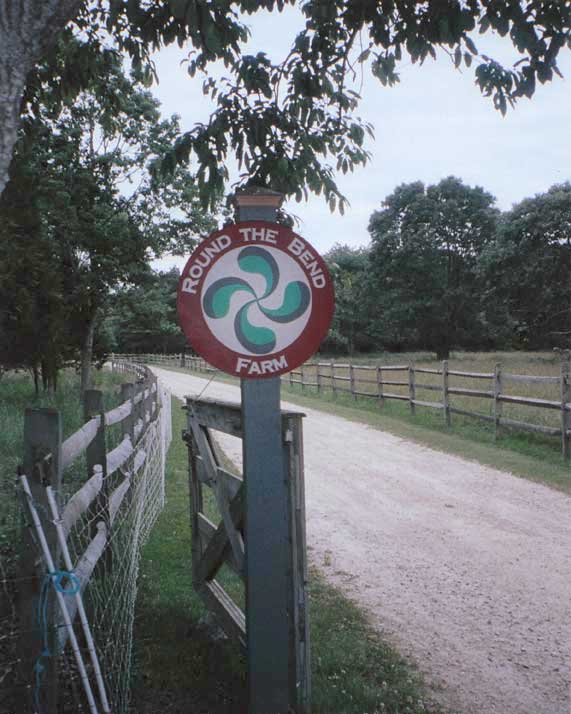 I give my signs an additional layer of protection with an exterior spray spar urethane. Drill at least two holes in the sign (I use 4 on the largest ones) as pilot holes to screw the sign to the side of the building. These 4′ signs on this cement block barn were attached that way, using screws and masonry anchors, so you see, you can mount a wonderful blessing and work of art on just about any surface!
This farm, called “Round the Bend” farm uses these “swirling swastikas” representing active growth, as a logo on their gate post as well. An interesting anecdote here: the farmer contacted me early last year to order a replacement for the sign, left. Seems it was stolen off the post!

They are near a college town, so he figures it was hanging on some dormitory room wall. I painted a replacement and

suggested securing it with security screws that would not be so easily removed. The design and painting of hex signs is, for me, a wonderful connection to my family heritage, as well as a delightful addition to my livelihood, and it is a blessing to be able to share it with those of you who visit Linda’s blog. Feel free to visit my website, DutchHexSign.com and enjoy my blog, which is also featured as part of that site.