Gods and Goddesses starting with X 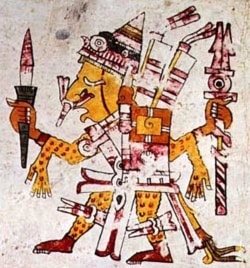 I know it’s a cheap shot, but I couldn’t come up with a better option for X, besides the one I’ve got for next week. So here’s a list of Gods, Goddesses and other beings starting with the letter X.

Xipe Totec The Aztec God of agriculture, spring and seasons, the symbol the death and rebirth of nature. He flays himself to offer food to humans. After he has shed his skin, he appears as a shining, golden god. Xipe Totec is also the god of the west and the patron of goldsmiths. He is thought to be responsible for sending diseases such as the plague, blindness, and scabies. He is depicted as a flayed man, covered in (his own) skin.

Xaman Ek The god of the North Star. In some places, Xaman Ek is referred to as “merchants’ guide”, probably because the North Star is the only star with a fixed position on the night sky. It is also said that the merchants offered him incense at the altars which can be seen at the side of roads. He is depicted with a roman nose and peculiar black markings on his head.

Xanthus This could either be one of the twelve sons of the god Pan, or one of the horses given to king Peleus of Phtia by Poseidon. Peleus later gave the horses to his son Achilles and they pulled his chariot during the Trojan War.

Xbalanque He was one of the sporty ‘hero twins’ who took part in the Underworld Cup Final and  thrashed the opposition. He was eventually elevated to Moon God. Every day when the sun goes down, he tosses the stars across the dark sky.

Xercioius Xercioius is the Greek God of ice cream if you believe what’s on the Internet. I found no proper references to him.

Xi Wang-mu She is the Chinese goddess of immortality and personifies the feminine “yin”. Xi Wang-mu has a nine-story jade palace in the Kun-lun mountains where male immortals live in the right wing and females in the left.

Xilonen The Aztec maize-goddess, called “the hairy one” referring to the hair-like tassels of the corn. In midsummer, humans sacrifices were performed in her honor to secure a good harvest.

Xiuhcoatl The Aztec fire-snake who was the personification of drought and scorched earth.

Xiuhtecuhtli He’s the Aztec god of light and fire and is often depicted with a red or yellow face, with a censer on his head. At the end of each 52-year cycle (the Aztec century feasts were held in honor of the Gods, with Xiuhtecuhtli was the center of attention. Victims were placed on burning coals after the hearts had been removed from the bodies.

Xmucane & Xpiayoc Xmucane and Xpiacoc were the divine grandparents in Mayan mythology. They’re considered to be the oldest of all the gods of the Mayan pantheon and had multiple roles throughout the Mayan creation myth. The pair was invoked during the creation of the world in which the Maya gods were attempting to create humanity. They were also invoked, often by other deities, for their skill in divination and matchmaking. Xmucane is by some considered to be associated with the waxing moon, contrasting to the possible role of her daughter-in-law as the waning moon.

Xochipilli The Aztec god of flowers, maize, love, games, beauty, song, and dance. Xochipilli is depicted with a stick of which the sharp tip penetrates a human heart.

Xochiquetzal The Aztec goddess of the Earth, flowers, plants, games, and dance, but mainly a goddess of love. She is also the patroness of artisans, prostitutes, pregnant women and birth. She was originally associated with the Moon. Her entourage consisted of butterflies and birds. Every eight years a feast was held in her honor where the celebrants wore animal and flowers masks.

Xolotl Another Aztec God. He was the God of lightning and guided the dead on their journey to Mictlan, which is described as the afterlife in some of the myths. He pushed the Sun towards the ocean at sunset and guarded her during the night on her dangerous journey through the underworld.  Xolotl was depicted as a skeleton, a dog-headed man, or a monster animal with reversed feet.

Xquic She was the daughter of one of the lords of Xibalba, the Maya Underworld. She was the mother of the Mayan Hero Twins, Hunahpu, and Xbalanque, and is sometimes considered to be associated with the waning moon.