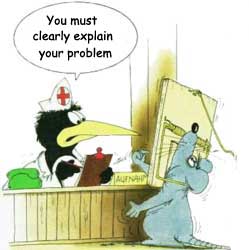 I had another doctor’s appointment today. Not for the cold this time, although I haven’t been able to shake that, but a regular meeting to extend my sick-leave, and get a referral for an ultrasound of my shoulders. I ended up getting the extended sick-leave, and a referral to an MRI of the shoulders. This was because the waiting list for the ultrasound is so long, they’ll likely send me to the MRI anyway. I have nor problem with this. Now I might get an appointment within weeks instead of months or years. He said we’ll wait for the pictures before he issues a referral to the Orthopedic Unit for further investigation.

My shoulders are totally shot after the exam. He had me lift  my hands every which way, and press outwards, inwards, down and up several times. He finally concluded that they’re loose and clicking. He said I’ve probably got some damage because of this, but he doesn’t think it’s Osteo Arthritis. After checking my elbows and hands as well, and me saying I can touch the floor even on a bad day, he finally agrees I’m Hyper-mobile. Something I told people over 20 years ago. But I guess they all have to find out for themselves. They can’t take your word for it.

As for the cold, I’ve had it for two weeks now. When I have a cold, the worst is normally over in two to three days. But this one lingers. I’m having a cut of hot cider now, and I’m taking a vitamin C boost before bed. Yes’, I’m aware the test say it does no good, but it’s helped me with both colds and urinary tract infections in the past.

Our daughter turned four last Sunday and had her four-year checkup yesterday. More on that in the latest post on her blog (click the flags for a translation). On another not, I had another problem with the nurses at the doctor’s office. Again they hadn’t done what they were supposed to do, and that twice in the same day. They were supposed to order a call for me but hadn’t. As this has happened before, I always check well ahead of time. I had to call them and make them do it. On the way home, I went by the nurse and asked her to order my return. She said she’d do it right away, but when the cabbie dropped me off at home, she still hadn’t. I hope they fix that so he gets his money. He’s the nicest cabbie I know.