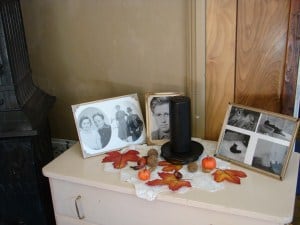 It seems most of my celebrations get cut short these days. I really didn’t get to do the alvablot I wanted to, because of fatigue and a lack of time. So it got compressed into a toast each to my ancestors, my pets that have moved on and the alfar, vættir, nisse, and all the other unseen. I also really wanted to involve my daughter Lilith this time, but it got too late for her to be up. I’m going to try to involve her at Jul instead. She really loves to be a part of these things, but I don’t get to involve her as often as I’d like to. As I have done the last few years, I’m keeping the pictures up on the dresser until the end of October. As a side note, Lilith’s daycare has been talking about the Norse gods and goddesses the last month. They talk about the names of the days, and what the Gods were known for. Unfortunately, they’re teaching them that Friday (Fredag) is Freyja’s day, but etymologically that’s wrong (which an etymologist has told me). But I’m just happy they’re bringing it up, especially after someone attempted to push Christianity to the kids this spring. I wasn’t the only parent to react to this, several other parents brought it up with the employees there. When Lilith started talking about Tyr and Odin, I asked if she’d like to hear more about them, and the other Norse gods and she said yes 🙂 So I’ve borrowed some of the books by Tor Åge Bringsværd from the library. They’re a bit above her level, but they’re the only option I’ve found in Norwegian. I hope I’ll be able to keep her interested even if they’re written for kids that are a bit older than her. I don’t want to push her into heathenry, but I’d like her to be informed. Nature School is another part of that.