Álfr, the Elves of Norse Mythology 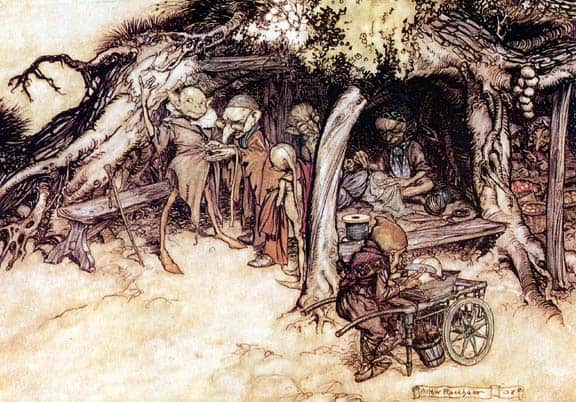 Let’s dive into the subject of Elves. The ones from Norse Mythology are quite different from the cartoon and modern fairytale version.
Even though the tales of the elves have spread worldwide thanks to books and movies, they’re a Northern European phenomenon. The earliest known reference to Elves that still exists comes from Norse Mythology. In Old Norse, the Elves were called álfar, In today’s Norwegian, they’re called Alver, not too far off. Most Germanic languages have similar words for them.
The word alfr comes from the Proto-Germanic *albiz (or *alboz), a variation which gave the Old Norse álfr, which in turn was the source for the Anglo-Saxon oaf and ælf. Some speculate that the origin of the Proto-Germanic word is Indo-European *albho- meaning white. 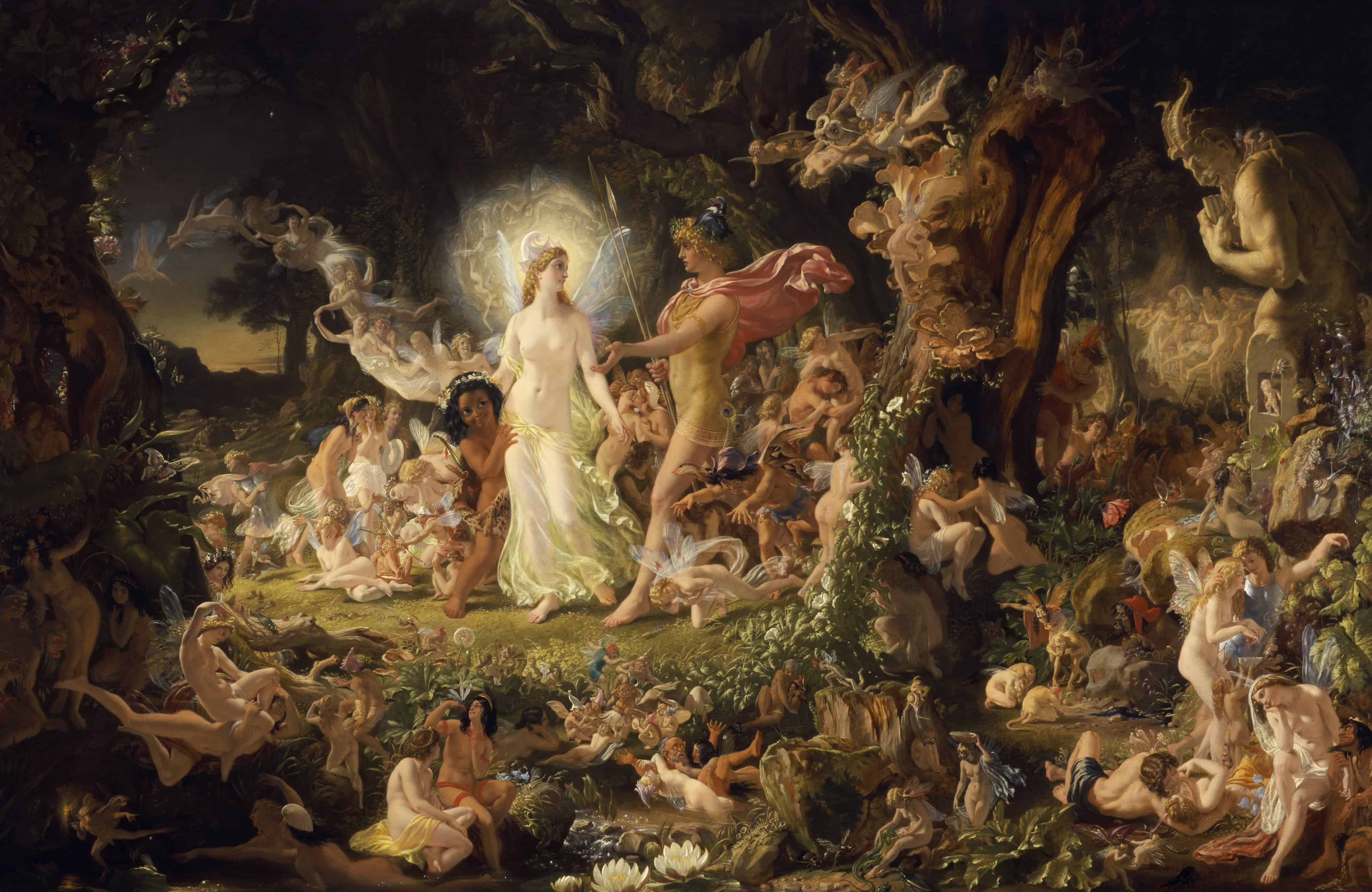 Elves seem to have been very popular amongst the ancients, judging by the many names that relate to Alf or Elf. The term has been preserved and carried on in names like Alf (and Alv), Alfhild, Alvar (Halvard). Alf was a particularly popular part of Anglo-Saxon names like Ælfræd which means ‘Elf Counsel’ (the modern name is Alfred), Ælfwine ‘Elf Friend’ (which is Alvin), Ælfric ‘Elf Ruler’ (which is Eldridge), and also in female names like Ælfflæd ‘Elf Beauty’.
They’re often mentioned alongside the gods, and usually as lesser spirits of nature. They have been known to aid both men and gods when they felt like it.
In Kormáks saga, there’s a description of the fighter Torvard sustaining a wound which won’t heal, and his wife suggesting that he smear blood on a stone under which the Elves live.
Elves were connected to mystery and magic and had a terrible temper if offended. They were powerful beings who ought to be respected. If you didn’t, you’d live to regret it.
In Norse lore, interbreeding between the Alfar and humans was possible and did happen. For example, the hero Hogne was the son of a queen and her Elven lover. Elves are mentioned in Heimskringla and in the saga of Thorstein Vikingsson, a tale of a family of local kings who ruled over Álfheim. 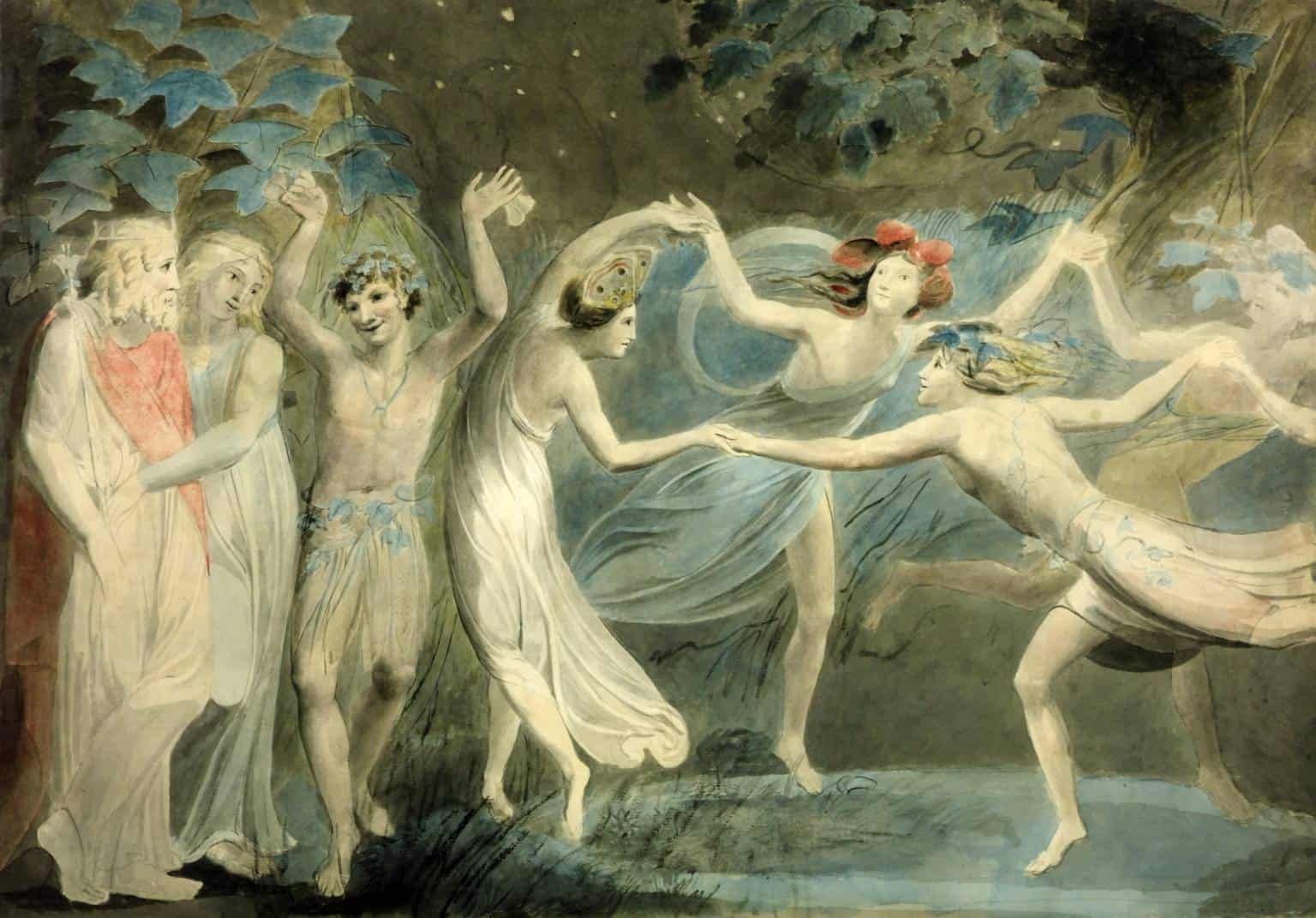 The poem Austrfaravísur by Sigvat Tordsson, written around 1020, speaks of a Christian who was refused entry into a heathen Swedish home because they were celebrating Álfablót. What this blót meant is uncertain, because there are no descriptions of it, but it’s generally assumed to be connected to the ancestral cult.

In a couple of sagas, men with high status got the name ‘alf’ after death. That’s one reason why there have been speculations of an ancestral cult related to the Elves. It’s been speculated that the Disir would be the female ancestral spirits and the Alfar the male. 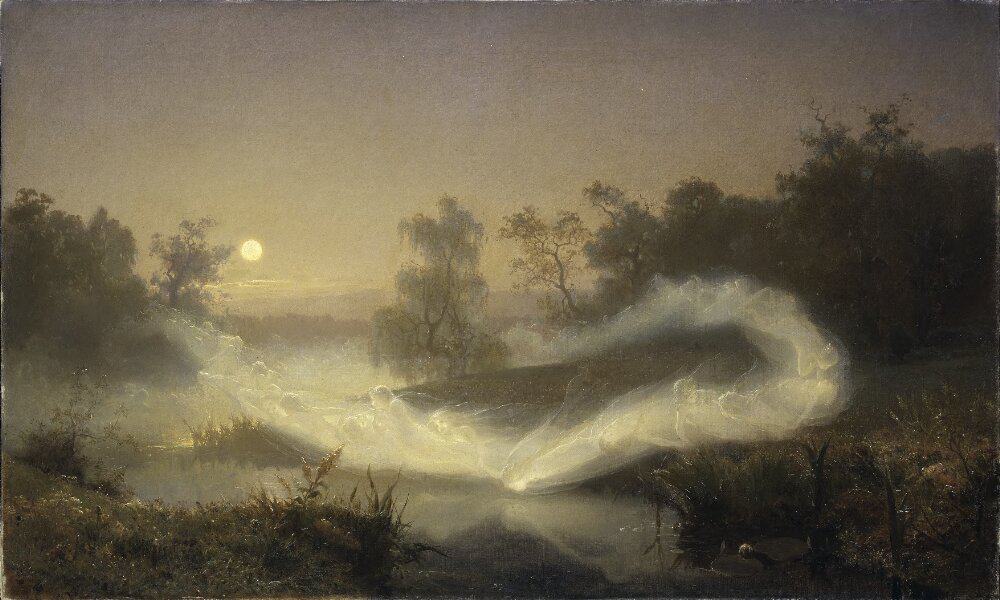 In the Edda, Snorri makes the distinction between light-elves, dark-elves and black-elves. The light-elves are supposedly fair to look upon, and they live in Alfheim. Alfheim was given to the god Freyr as a gift for his first tooth, and some see Freyr as the ruler of the elves. In Alvíssmál, the Elves are seen as separate from the Vanir and the Æsir.
The Dark Elves live in the dark and are more mischievous. Later in the same book, Svartalfheim and black-elves are mentioned in a way which makes it probable that Snorre is talking about dwarves. This division of the Alfar may come from the Christian notion of good and evil. We have to remember that Snorri was a Christian man describing a previous culture. His views did affect what he wrote about and how he described it.

“Ängsälvor” (“The Meadow Elves”) oil painting by Nils Blommér in 1860

The Elves of Norse mythology are usually considered to be the height of humans or just above, and they were thought to be long-lived or immortal. 19th-century Romanticism attempted to restore them to full stature, making them men and women of great beauty, often depicted as very young. They were depicted as very beautiful young men and women in drawings and paintings. From this, the Elves entered the 20th century as a literary fantasy genre in the backwaters of J. R. R. Tolkien’s publications, especially the posthumously published Silmarillion.
The decline of the Elves started with the introduction of the Christian faith, and by the 16th century, their popularity dwindled to having a status as tiny, malicious, sometimes evil spirits thought to be in league with or as bad as the devil and his flock.
When you read about elves in stories from the later Christian period, you hear about elves being seen at night dancing over meadows and marshes, and the circles they left behind are still to this day called elf dances in Swedish. We now know them to be caused by a fungus but back then, they didn’t know this.
If a human stopped and watched the elves dancing, he would find that even though only a few hours have apparently passed, it has actually been many years in the real world.
You also find stories of people being pulled into the hills where the Elves lived and kept as slaves. Of an Elven Queen or Princess luring men to her to have as sex slaves.

When people found neolithic flint arrowheads in the past, they were called Elf Shots. They were imagined to have been created and used by the Elves, and sudden paralysis was sometimes attributed to elf-stroke. If one offended the Elves, this was a possible payback. 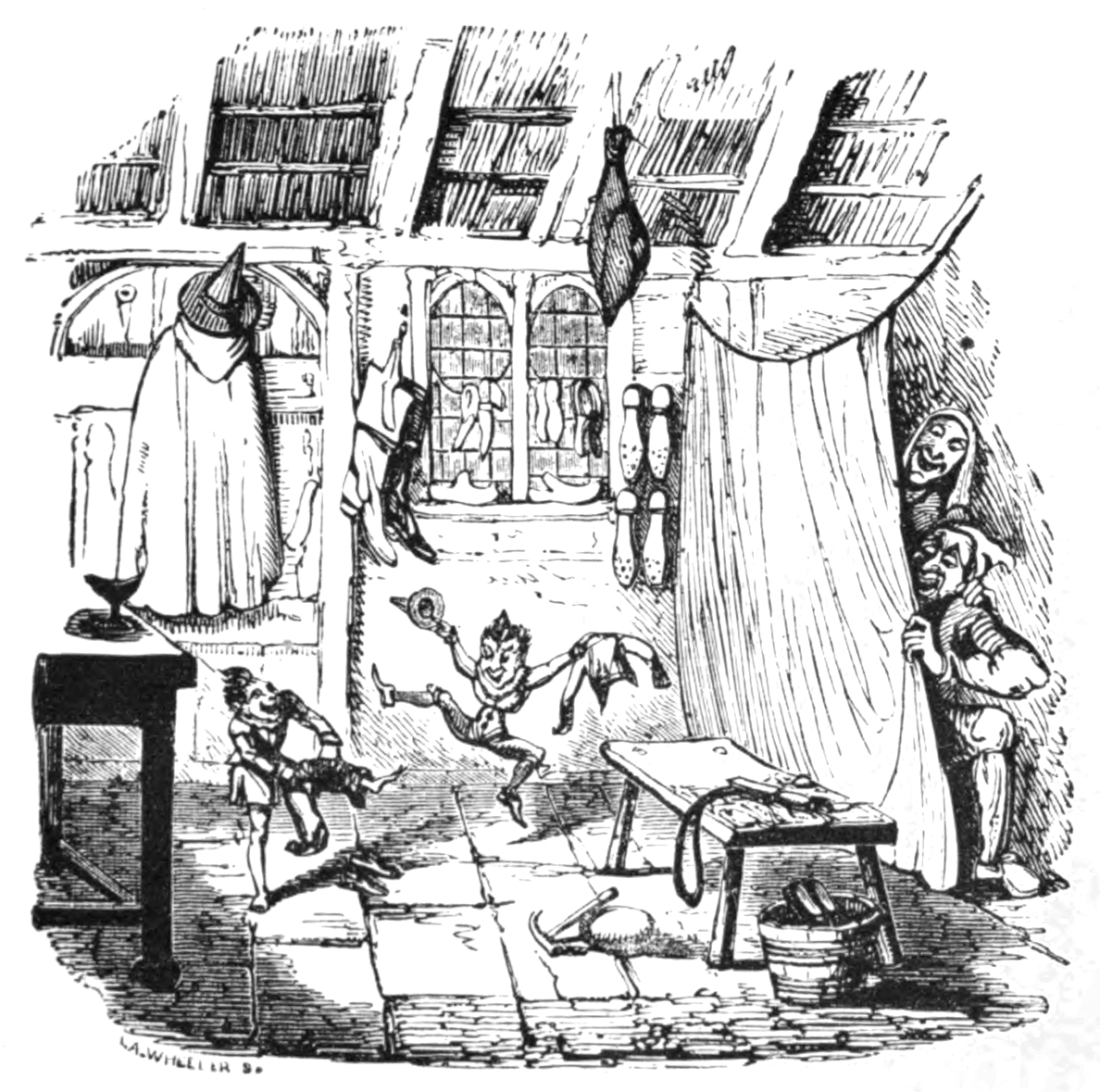 In early modern folklore, as well as fairy tales and movies, they’ve become associated with the fairies of Romanticism folklore and have a relatively small size, often living mainly in forests but also underground in hills or rocks, or in wells and springs. In some stories, like “The Elves and the Shoemaker” by the Grimm brothers, the Elves decide to help a human succeed. So they’re not just pretty or evil in fairy tales.
In Scandinavia, the Elves are separate from the wights, even if the boundaries are a bit blurry. The fairies with insect wings in British folklore, are sometimes called ‘älvor’ in modern Swedish, ‘alver’ in Norwegian and ‘alfer’ in Danish, but the correct translation would be ‘feer’. Elves and Fairies are different creatures. 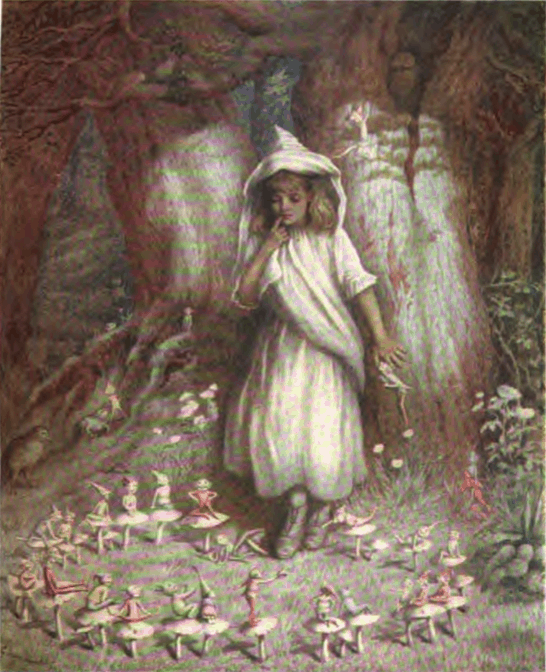 The legends of the Elves, the Nisse and Huldr have been so popular in Northern Europe, that they’re still alive. This is most noticeable around Jul.
The Icelanders either believe in or don’t want to deny the possibility that Elves exist. Some of this is maintained due to tourism, but many Icelandic people truly believe in the ‘huldufólk’, which are Elves living in mountains, hills and rocks. Roads have been diverted and planned houses moved because of this.
In the USA, Canada, Great Britain, and Irland modern fairy tales and stories for children about Santa Claus, also include little Elves. They’re dressed in tight-fitting green clothes, have pointy ears, sometimes long noses, and pointy hats, and are said to be Santa’s helpers or workers. They make toys in a factory located at the North Pole.
This version of small but handy Christmas Elves, have commercialized the modern perception of Elves, side by side with the Elves in fantasy literature. The Elves have visually become small children who never age, and thereby don’t reproduce either.
The “Christmas Elves” of contemporary popular culture were popularized during the 1870s in the United States, in publications such as Godey’s Lady’s Book.
In recent years, it’s become popular to put up elf or fairy doors and houses in the woods. I love this. There’s also all the people cosplaying as elves and the elf on a shelf dong mischief at Christmas. I think it’s good to see mythology and folklore making a return to the minds of people and media, even if they differ a bit from the earlier descriptions. 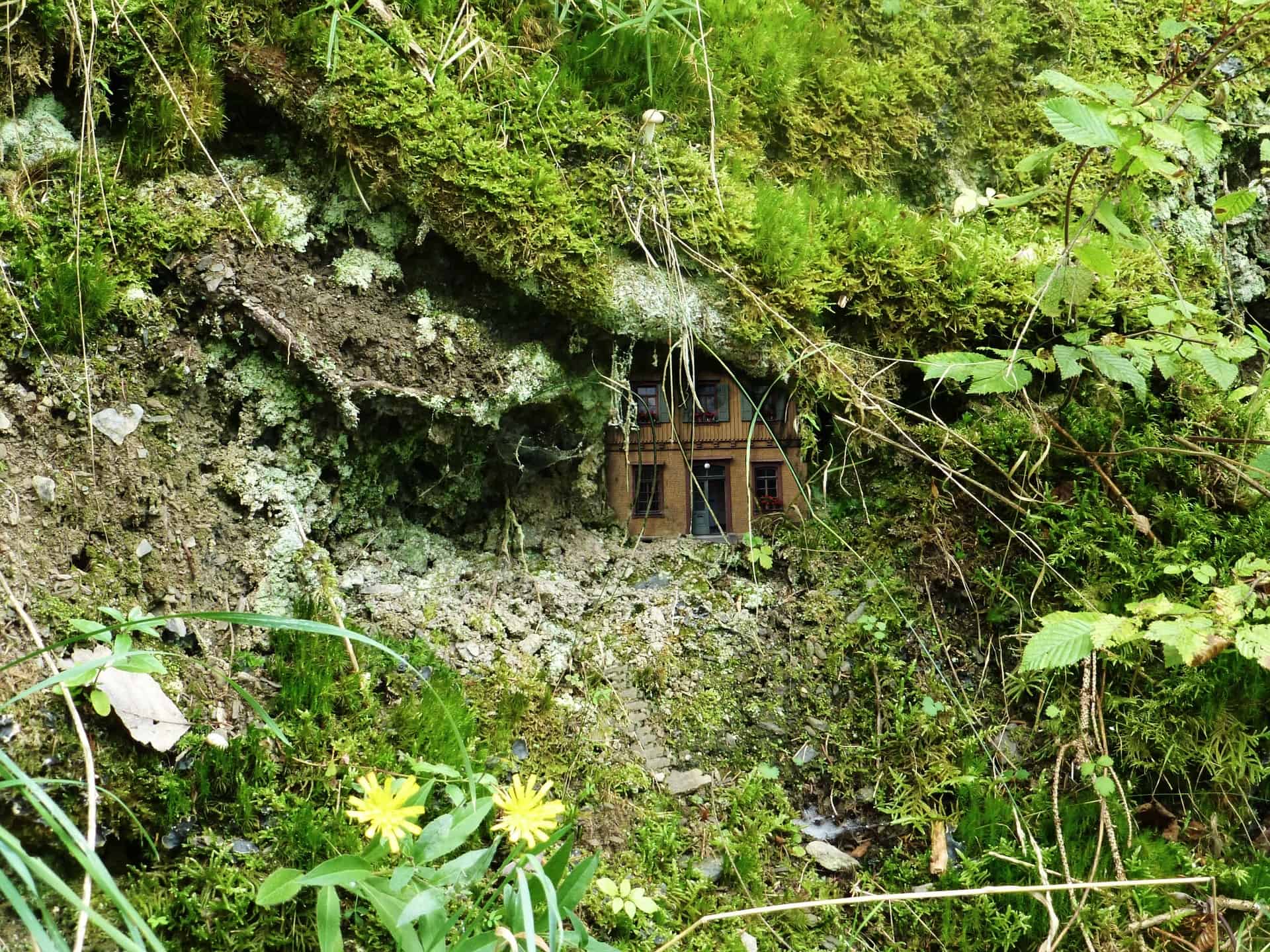 I think it’s good to see mythology and folklore making a return to the minds of people and media, even if they differ a bit from the earlier descriptions.
That’s all I had for my summary of the Elves.

Do you believe in Elves or Fairies? What do you think they’re like?

Connect with me in the comments