A lot of misinformation about Galðr 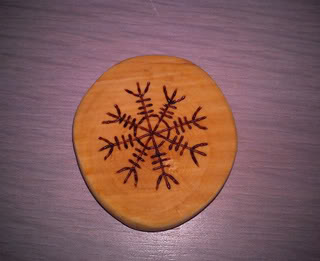 I’ve seen so much misinformation about Galðr, that I think it’s time to set the record straight.

Galðr is not the intonation or voicing of the runes of the Elder Futhark.

No matter what some so-called experts say.

Now I’m not saying I know everything, or that I’m an expert at this. But I have done research on the subject, and the sources I used were local. I used the Sagas, the Eddas and Scandinavian research papers. I also had conversations with people I know have a lot of period knowledge.

I’m not anti-American, but most of the sites and books containing this misinformation are American or rely on American sources. The same seems to be true for a lot of other sources of bad research on Asatru and Viking Age subjects. Sorry for the rant 🙂

A Galðr is a verse or poem written in the meter Galðralag. It might also be called a spell or spell song, to use more descriptive words. I believe they were used for as many different reasons as witches use spells. Galðrar are mentioned in several poems in the Poetic Edda. One example is in Hávamál, where Odin claims to know 18 galðrar, another in Skírnismál, where Freyr’s servant Skirnir uses galðr to make Gerðr fall in love with Freyr.

Examples of galðrar are also found in Grógalðr and in Frithiof’s Saga. Etymologically, the word galðr is related to the verb gala, which means to crow. This has lead to some believing that they should be sung in a high pitched, or shrill voice. I believe they were spoken or sung in a normal voice.

Galðr means spell song and lag means verse. In Snorri’s verse teachings, you can see that galðralag, after the two lines with two marked syllables, ends with two lines with three marked syllable. As a rule, there’s parallelism between the two final lines. The Galðralag is called the ‘magic spell meter’, because of it’s short, incantation like form and rhyme. It’s been described as a variant of ljóðaháttr, which has a fourth line rhyme which echoes and varies the third line of the stanza. Some examples show seven lines. Stanzas : 1 Stanza Type : Quattrain Lines : 4 Accents : Varies Syllables : Varies Rhyme : aabb

Here’s an example from the Eggjum stone in Sogn, Noway. The stone is from ca. 700 C.E.

Please note that this post does not diskuss the Icelandic Magical Staves. That’s a different subject.