You’re Not Lost: How to find yourself when life takes a detour 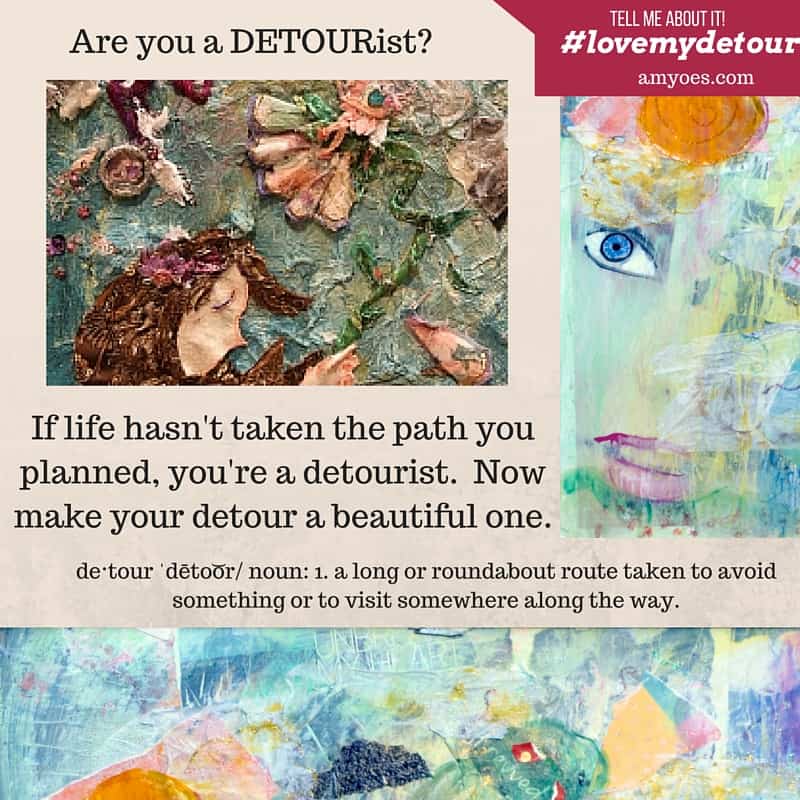 Sometimes, the best way to find yourself is to just get lost. When you don’t know where you’re going, the world can be a scary place. That’s what drives our to-do lists, our calendars, our goals and our life plans. I know this all too well, as someone who had a minute-to-minute agenda, planning and plotting every major milestone in my life from birth to bachelor’s degree to Broadway debut. But sometimes, life takes a detour. Something that a 2016 yearly planner can’t always account for. 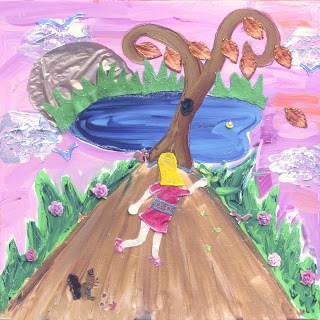 Google has an answer for that:

1. a long or roundabout route taken to avoid something or to visit somewhere along the way.

“he had made a detour to verb

1. take a long or roundabout route.

“he detoured around the walls”

A detour, according to its French origins, literally means a change of direction.

I, however, have my own definition of a detour:

A detour is a curve in the road of life, a bump in a path, a big sign in the middle of your trip that says, “sorry, you have to go THAT way.” Nobody expects a detour to happen, in life. It’s what happens when we think we have things planned and all figured out…and then we’re thrown a curveball.

A detour is many things – unexpected, a nuisance, difficult, hard to grapple with, frustrating, – but it can be beautiful. Sometimes, we can’t appreciate how beautiful our detour was until we’ve made multiple twists, turns, and deviations in our “set-out” path. Sometimes, we can’t realize the beauty of our detour until we spend a bit of time traveling it – we need to give that detour enough time to form a story of its own.After all, every good story comes from a detour. What would be so funny about a forum if “A Funny Thing [never] Happened on the Way to the Forum? (It’s a musical, FYI.)

By sharing our stories, we make sense of our “detours.” We reframe our “derailments” as the intricate pathways that make up who we are today. When we tell others about our detours, we become travel partners on these journeys with no straight path. When we know we’re not traveling alone, that road becomes an adventure. Who can say they’ve never had an unexpected glitch in their life-plans? That’s a detour. 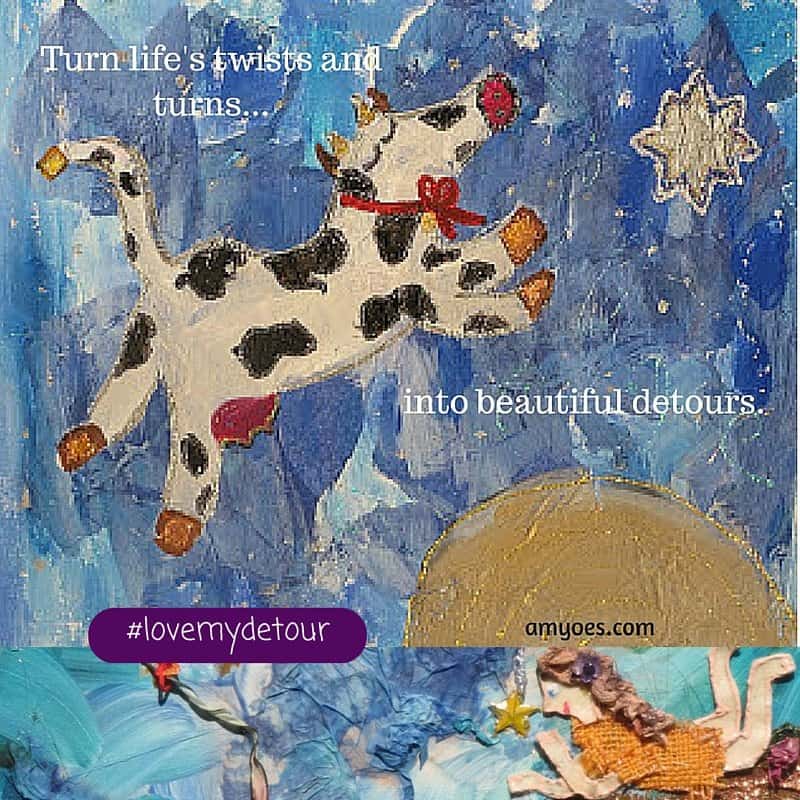 What detours force us to do is explore new opportunities. When we can’t go in the direction we anticipated, we’ve got to switch gears and adapt. We have to resource inner strengths that we never knew we were capable of accessing. When we achieve the “unthinkable”, we diskover who we really are.

Even still plagued with wounds, scars, and some medical issues that haven’t been resolved, I’ve found beauty in the detours. If I took away all of the setbacks, hurdles, frustrations and detours, I wouldn’t be who I am today. Telling my story made me realize the true beauty of my detour.

That’s what makes me a Detourist.

A detourist travels along detours – simple enough.  But in addition, a detourist embraces those unexpected routes as opportunities for growth, change, and self-fulfilllment.  I’m living proof that a detour can lead to unexpected blessings.

As a detourist, I look for the upside of obstacles.  I welcome the unexpected change in my “thought-out” life and see what opportunities may arise.

Because of my ten-year surgical marathon, I’ve written a one-woman musical about my life, Gutless & Grateful, I diskovered the world of mixed media art, I’ve met amazing people, diskovered incredible new experiences, and have been through the worst to make room for the best.

How do we make the best of a detour? Sometimes, we just need to hear that otherDetourists have navigated their paths triumphantly. What I’ve experienced is, the more inspiring stories we hear about Detourists turning an obstacle into an opportunity, the more empowered we are to transform our own lives and have confidence that when life DOES surprise us, we’re capable of getting through anything.

Now, I want to inspire people to flourish because of, rather than in spite of challenges.#LoveMyDetour aims to encourage growth and healing by sharing our stories; to transform communities by inspiring people to open their minds and reframe their view of “detours” into a new direction for life. That’s why I’m spreading#LoveMyDetour around the world. 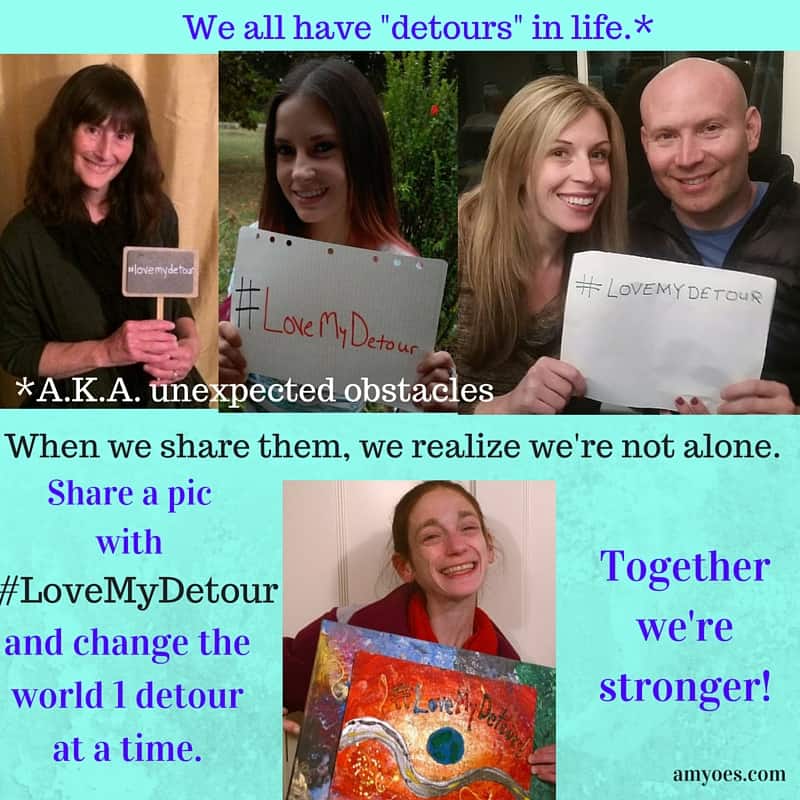 With that in mind, I’d like to leave you with six ways to love your detour:

1. Savor the element of surprise. Straight paths are boring.

2. Find one beautiful flower along the path and name it after the detour that led you to it.

3. Keep traveling to see where it leads.

4. Find a new friend along the path.

5. Use it as a chance to locate your internal compass.

6. Put the pedal to the metal and take the best road trip of your life!

So how do you get un-lost?

Well, you get un-lost when you realize were all detouring together. If we keep going, we’re not lost. We’re Detourists.

#LoveMyDetour is a campaign inspiring people to flourish because of, rather than in spite of challenges.

#LoveMyDetour aims to encourage growth and healing by sharing our stories; to transform communities by inspiring people to open their minds and reframe their view of “detours” into a new direction for life.

“Detours” have created the most scenic surprises in my world. Now, I envision a world where “detours” in life are everyday blessings. The road is open with open possibility, with voluptuous curves, with wandering wonder. 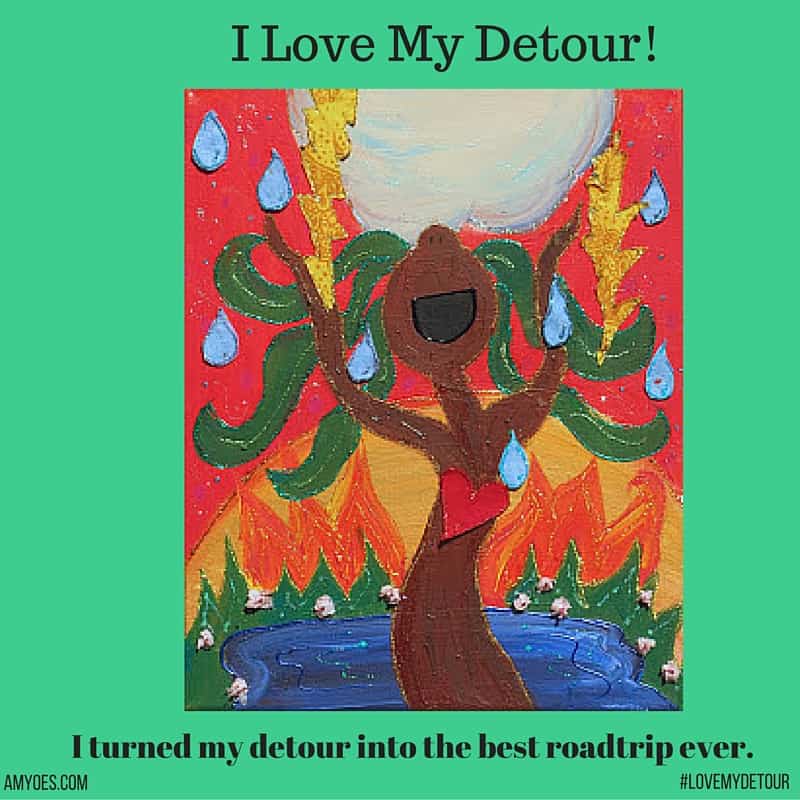 As the writer, director and star of the Gutless & Grateful, her one-woman autobiographical musical, she’s toured theaters across the country, earning rave reviews and accolades since it’s BroadwayWorld Award-nominated NYC debut.

As a visual artist, her works have been featured in esteemed galleries and solo exhibitions, and her mixed media  workshops emphasize creativity as an essential mindset.

Amy’s “beautiful detour” inspired her to create the #LoveMyDetour movement, a campaign inspiring people to flourish because of, rather than in spite of challenges.  As the Eastern Regional Recipient of the Great Comebacks Award, Amy has spoken to hundreds of WOCN nurses on behalf of ostomates nationwide.  She is a regular lifestyle, wellness, and arts contributor for several notable online and print publications, and has written for over 50 online magazines and blogs. on Her story has appeared on the TODAY Show, CBS, Cosmopolitan, Seventeen Magazine, among others.

Find out how to get involved with #LoveMyDetour, and give your support here. Learn more about creating compassion through our detours at amyoes.com.

Amy’s passion for the arts as a means of healing and expression led her to devise storytelling workshops for the Transformative Language Arts Network National Conference, the Eating Recovery Center Foundation, and The League for the Advancement of New England Storytelling.